Anthony Hamilton sat on his front porch contemplating who could have possibly murdered his 28-year-old daughter, Jasmine Chandler. His neighborhood is serene compared to the chaos that ensued on the streets of Baltimore, Maryland in February 2018 when Jasmine was shot and killed while sitting inside of a car.

It was a Sunday when Jasmine, a mother of a 10-year-old, and her pregnant friend Mia Robinson, who is also a mother of three children, were making their way to a beauty supply store. Jasmine planned on doing her friend’s daughter’s hair that evening and was set to start a new job the next morning working at an eldercare facility. According to her father, she recently completed her certification and was excited to begin this new season in her life. 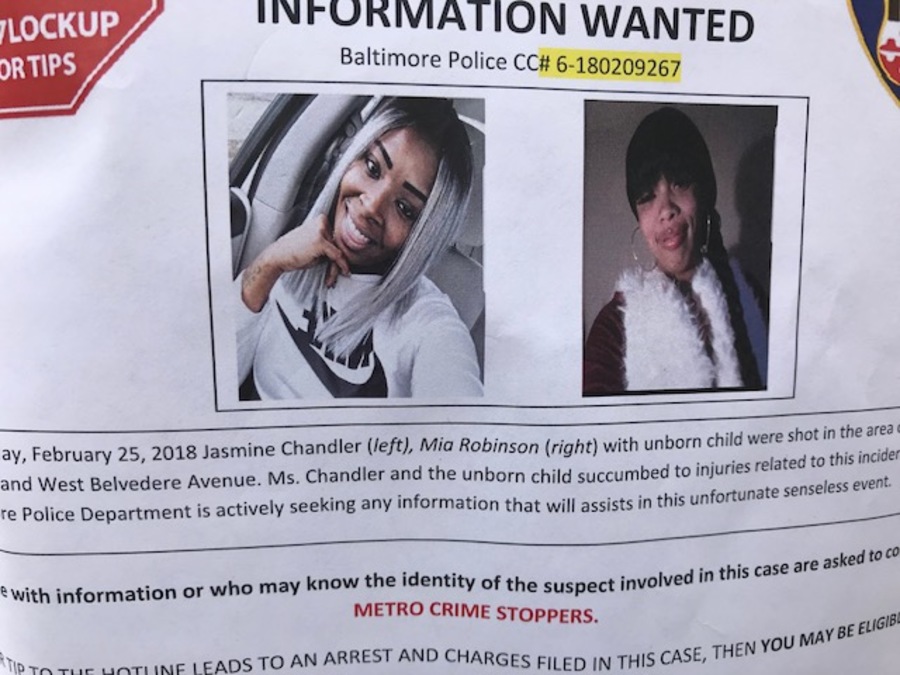 The ladies were reportedly sitting in a parked car when they were accosted by a gunman who fired multiple rounds into the vehicle. Jasmine Chandler was driving the car that she borrowed from a close friend. When emergency vehicles arrived on the scene, Jasmine was still alive but in critical condition. She was rushed to the hospital but later passed away.

Her friend, too, was injured with numerous gunshot wounds. Mia Robinson survived her injuries, but her unborn baby wasn’t so lucky and didn’t make it. Doctors were reported as saying that had the child not been shot in the womb, they believed the child could have lived even though Mia sustained other injuries.

“People are just killed for no reason. It’s just crazy out here now,” said Anthony Hamilton as he reflected on the violence in his city. Jasmine’s father has been taking care of his young granddaughter who is still trying to accept her mother’s death. He believes that his daughter and her friend were victims of mistaken identity and they may have just been in the wrong place at the wrong time.

“She woke up crying about her mother,” he said about his 10-year-old granddaughter. “Your kids are supposed to bury you, not you burying your kids.”

The identity of the shooter is still unknown months later, but a witness on the scene said that the man responsible was arguing with one of the women in the car. After the gunman opened fire, he fled the scene.

“It has sunk in and it hasn’t sunk in. I’m just wondering: Why? That’s all. Just why? You’ve got guys out here killing women now. It’s just terrible,” Anthony said. “It’s just getting closer and closer to home. Things happen, people doing things, you know, it’s just getting crazy out here.”

Anyone with information about this case is urged to contact authorities at 410-396-2100 or Metro Crime Stoppers at 1-866-7Lockup. There may reportedly be a reward involved if the tip leads to an arrest.

Please share this article to continue the discussion about Jasmine Chandler and the unborn child’s murder. Jasmine is our sister and her life matters.