*UPDATE* The body of Kiera Bergman was found on the side of a highway, 45 minutes from her Phoenix apartment. She had been missing for 30 days. Police are in the beginning stages of investigating her murder. Her boyfriend was charged with second-degree murder but in April 2020, the charges against him were dismissed. A cause of death has yet to be determined.

As many other young women do, 19-year-old Kiera Bergman moved to another state to be with her boyfriend, 23-year-old Jon-Christopher Clark. She traveled from San Diego to Phoenix in March of this year, but soon after arriving, Kiera and Clark broke up. As she mourned the loss of her on-again-off-again relationship, Kiera moved in with her friend Destiny Hall-Chand. The ladies lived and worked together, so when Kiera didn’t show up for work on August 6, Destiny had a sinking feeling in her stomach that something was wrong.

According to Destiny, the last time she talked to Kiera was two days prior on August 4. She said that while at work, Kiera became upset and left early. Clark picked her up and Kiera hasn’t been heard from since.

Text messages showed that Clark and Kiera Bergam exchanged “I love yous” early that morning. Around 10:30 a.m., Kiera sent another text to Clark telling him, “You need to come get me.”

Clark claimed that he gave Kiera a ride from work back to her apartment. He admitted that while there, the couple got into an argument about money because Kiera thought that Clark was leaving Phoenix to take on a new job in Texas. He said that he left Kiera at her apartment around 1:00 p.m. and has no knowledge of where she is or why she’s missing.

“She’s trying to keep me in good spirits because it’s my birthday. But I was kind of sad because we weren’t really doing anything and then we just started getting into a little bickering, arguing and then she got upset and then she left,” he told The Arizona Republic. 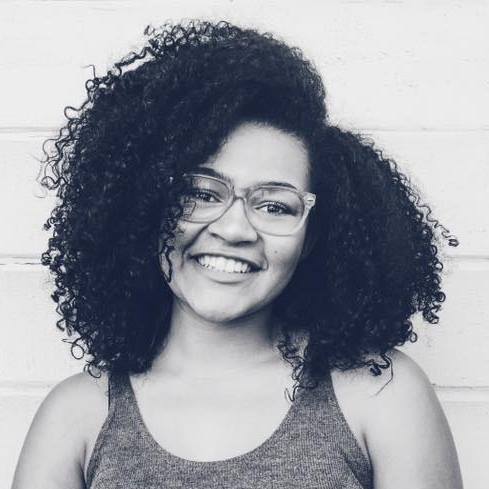 Clark then said that a little after 1:00 p.m., he sent Kiera a text asking her where she was. Instead of telling him her location, Kiera brought up the issues of their fight. Later on that day, Kiera’s roommate Destiny texted her as well asking what she was up to. During the exchange, Destiny claimed that Kiera Bergman sent a vague message.

“She told me that she was picked up by someone, someone that she had met at the store a couple of days ago. This person is unknown… Nothing makes sense.”

Could this mystery person be the one responsible for Kiera’s disappearance? 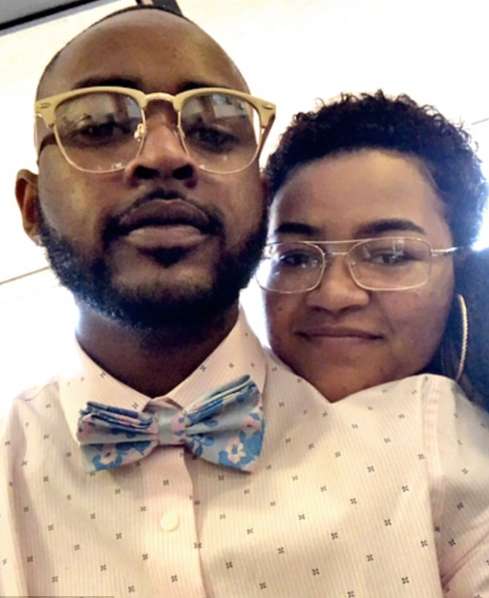 “When she left there was no immediate concern because we have had arguments in past where either me or her have left for an hour or a couple at a time to go clear our head,” Clark said. “I didn’t really find it unusual until she wasn’t in contact with me.”

When she didn’t show up for work on August 6, Destiny began to worry. She called Clark and they notified authorities.

“I understand everything that they’re [Bergman’s family] going through, that they want to find Kiera and find answers,” Clark said. “But my heart is in the same place that their’s is, and wishing and praying for Kiera to come home safe…. I had nothing to do with anything that’s going on. I love Kiera with all my heart, I want Kiera to come home.” 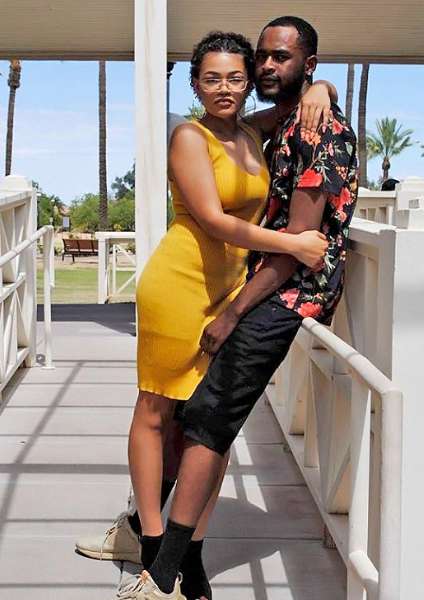 Police didn’t fully believe him, so they asked him to take a polygraph test. He denied their request.

“I told them I would not like a lie detector test because, ‘One, they are not admissible in court, and two, whatever you guys gather from that is basically your interpretation on my feelings,'” Clark added. “So I didn’t want [investigators] to pretty much gather [their] conclusions off of something that is not guaranteed.”

Meanwhile, Clark was later arrested on identity theft and forgery charges after police searched his vehicle and found “numerous items with personal identifying information of others, as well as items of forgery, were located.” He’s facing 20 various charges and is being held on a $25,000 bond. 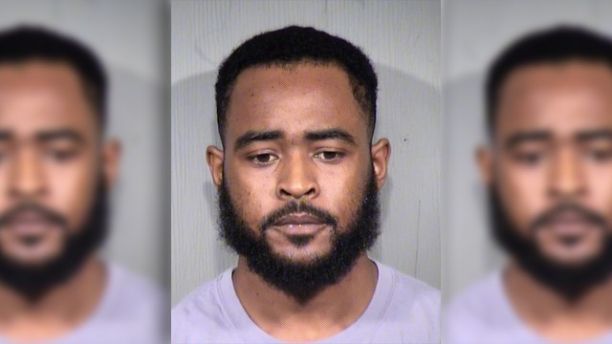 Four days ago, Clark made a lengthy post on Instagram speaking on his relationship with Kiera and the accusations set against him.

“It hurt me so deeply that I was not able to attend Kiera’s Vigil of Hope because her mom did not want me there,” Clark wrote. 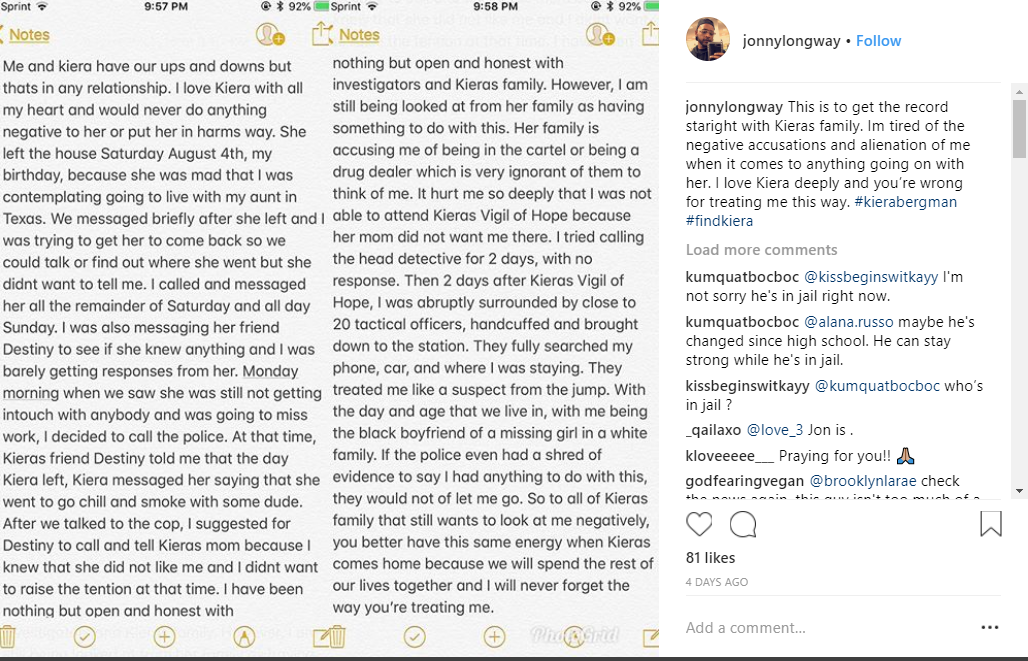 “We just want her back,” Chris told HuffPost. “Please, just call the police. A piece of our heart is missing, and without it, we don’t feel whole. It’s heartbreaking. Please, somebody, say something.”

Crime scene technicians inspected Kiera’s apartment. They were primarily focused on her room where they made strange discoveries.

To help pay for the family’s travel expenses and private investigators involved in the search for Kiera, they’ve started a GoFundMe campaign. Contributions have exceeded $20,000.

Kiera Lanae Bergman is 5 feet 3 inches tall and weighs 145 pounds. She has black/dark brown hair and brown eyes. Both of her ears are pierced and she has a sun/moon tattoo on her left leg. Her middle name is “Lanae.”

Those who may have any information regarding Kiera Bergman’s missing person case are encouraged to contact Silent Witness at (480) W-I-T-N-E-S-S or (480) T-E-S-T-I-G-O for Spanish speakers. The call is anonymous.

Please share this story to continue the conversation about the disappearance of Kiera Bergman. She is our sister and her life matters.

Merkedes Jordan, 21: Hasn’t Been Heard From in 12 Years

Devine Tollett, 18: Disappeared From Houston In 2018

Le-Shay Dungey, 19: Disappeared While Walking To Friend’s House In 2018

Donna Calloway: Police Refused To List Her As A Missing Person