UPDATE: The body of Wamaitha Kaboga-Miller was found in her car five weeks after she was reported missing. California Highway Patrol officers stumbled upon her vehicle hidden in heavy brush off the side of Highway 84 when they were responding to a separate, unrelated vehicle accident. When an officer spotted Wamaitha’s car 25 feet away, he checked and ran the license plate number. Wamaitha was found sitting in the driver’s seat as if she drove off of the road and hadn’t moved. The coroner is still investigating her cause of death.

A week ago, Wamaitha Kaboga-Miller did what many of us do when we have to make a quick run to the store: we roll out of bed, throw whatever clothes on we can find, and head out of the door. In Wamaitha’s case, she kept on her pajama pants and threw on a white, long-sleeved shirt. For good measure, she also put on a black puffy vest to cover her bulky back brace. Two months ago she had back surgery.

She left her multi-million dollar Palo Alto home and drove out of her gated community to visit nearby Country Time Market so that she could pick up cigarettes. She was seen by security cameras pulling up to the store on University Avenue, parking her car, and making her way inside slowly because of her brace. The market’s surveillance cameras saw her wandering around the store for a short time before she goes to the counter. There, Wamaitha rummages through her purse for almost 15 minutes as she is apparently looking for something. Wamaitha’s purchase was only completed after a helpful clerk pulls Wamaitha’s debit card out of her wallet for her and rings her up for two packs of cigarettes totaling $19. Wamaitha then leaves the store, slowly makes her way back to her silver Mercedes Benz, and then is seen driving out of the parking lot.

Since that time, Wamaitha hasn’t been seen or heard from again. 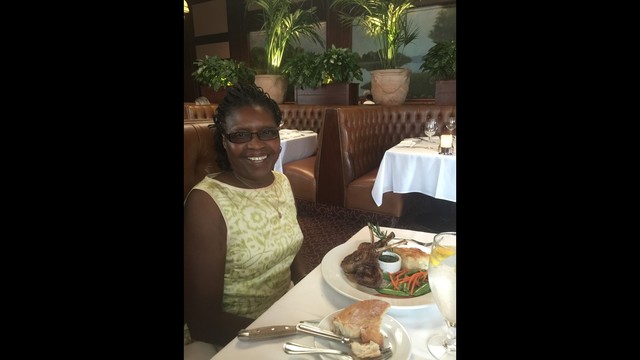 The 66-year-old Apple engineering buyer was driving in the direction of the Dumbarton Bridge toll plaza, but cameras there don’t show that she, nor her car, crossed the bridge.

“Our detectives remain in regular contact with Kaboga-Miller’s family and are continuing to investigate any possible leads as to her whereabouts,” the police said in a statement. “Our goal is to reunite her with her family as soon as we can.”

Wamaitha lives with her husband of 35 years and her adult son Njoroge “NJ” Kaboga-Miller. Both of the men say that her debit card hasn’t been used since making a purchase at the market and they can’t contact her whatsoever. They describe her as being “weak and frail,” and necessary items Wamaitha needs following her surgery are still at her home including her cell phone, her walker, and her numerous medications. 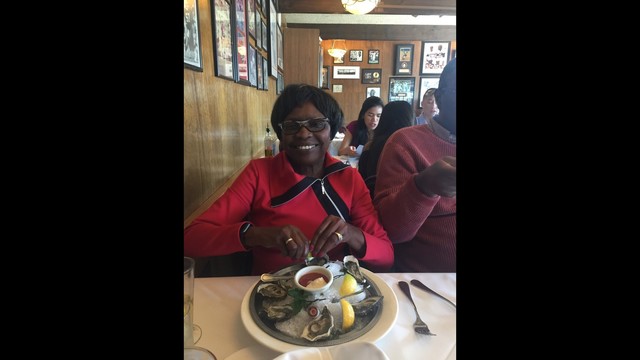 “It’s been nerve-wracking,” her son NJ said. “It’s literally been the worst and most tumultuous time of my life.”

“It’s a complete mystery,” he continued. “I just want to get to the bottom of it.”

It’s not just the back surgery that’s left her vulnerable; Wamaitha has also had two replacement hip surgeries and an operation on her shoulder.

“She has never disappeared like this before, never,” NJ said. “She’s always at the home, technically she’s disabled.”

Wamaitha’s family said there’s no way she just walked away from her life. She would tease her children about wanting grandkids and volunteered by helping the homeless and less fortunate.

“She loved life,” NJ said. “We had a great relationship. We always did family dinners on Sundays. We were always together. We are a tight-knit group of family members who loved each other.”

Police have considered her an “at -risk” missing person but haven’t specified whether or not they believe that her case involves foul play.

Wamaitha was last seen driving her silver 2002 Mercedes Benz with the disabled California license plate DP241LU. She is 5’1″ tall and 120 pounds. She has black hair, brown eyes, and is a Kenyan immigrant.

“Anybody with a mother would know she’s your rock and she’s your base so I need my base back,” NJ said.

Earlier today, family, friends, acquaintances, and strangers met up in Palo Alto to create search parties in hopes of finding Wamaitha and bringing her home safely. Dozens of volunteers combed through the areas near where Wamaitha was last seen. They went through the bylands, marsh, and grasslands just in case she may have gotten into an accident or wandered off. Catherine Kambuga, Wamaitha’s older sister, was emotional as she sat along the University Avenue sidewalk.

Update: Our detectives continue to actively investigate the disappearance of 66-year-old Wamaitha Kaboga-Miller. There have been no confirmed sightings of her since her family filed the missing person report on Saturday. Please call 650-329-2413 if you have information. pic.twitter.com/OGs6eC7jvp

Anyone with information about Kaboga-Miller’s disappearance is urged to contact the Palo Alto Police Department at 650-329-2413 or the family at 650-814-1189. You may also email information to cloviskmiller@gmail.com. Anonymous tips can be emailed to the police at paloalto@tipnow.org or sent by text message or voicemail to 650-383-8984.

Please share this story about Wamaitha Kaboga-Miller to continue the conversation about her mysterious disappearance. She is our sister and her life matters.