For 15 years, Laroya Nate Bray has been classified as a runaway.

At the time of her disappearance, Laroya was a 10th grader at Crenshaw High School in Los Angeles, California. However, the 15-year-old was getting ready to transfer to her new school, Dorsey High. According to those who knew her well, Laroya was a vibrant personality who had no problem speaking her mind, but she could be a tad coy around strangers.

On March 26, 2003, Laroya’s mother’s fiancé alerted Laroya’s mother, who wasn’t home, that he couldn’t locate the teenager. When Laroya’s mother returned around 11:00 p.m. that evening, Laroya still couldn’t be found. She was immediately reported missing, but because police believed she left by her own volition, she was listed as a runaway. To this day, police still don’t believe she is an endangered person.

Laroya has never been seen or heard from since.

In the early stages of the investigation, it was reported that Laroya was seen by a witness standing in front of her apartment building near Arlington Avenue and Adams Boulevard. It was stated that she was with a black man who was described as being 5’8″ tall with a medium build. This information was later revealed to be incorrect.

At the time of her disappearance, Laroya was 5’9″ tall and between 130 and 140 pounds. She has brown eyes and brown hair, but when she went missing Laroya had dyed her hair a golden-blonde color and had braided extensions of the same shade. She has double piercings in her ears, bushy eyebrows, and a long, narrow scar on her upper left thigh. She also goes by the nickname “Lala.” Laroya was wearing a red FUBU shirt, a white tank top, white socks, an imitation gold herringbone chain necklace with a V-shaped pendant, and gold earrings (hoops and studs). She’s known for wearing headscarves.

Laroya would be 31-years-old at the time of this publication. 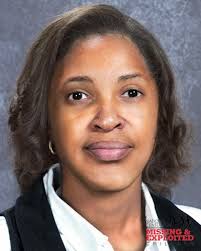 Anyone with information regarding Laroya’s missing person case is urged to contact the Los Angeles Police Department at (213) 485-2585.

Please share this story about Laroya Nate Bray and the mystery surrounding her disappearance. She is out sister and her life matters.