Update: It’s reported by The Doe Network that Erika Brown has been located. Details regarding the conclusion of her case are unknown and she’s been removed from the National Missing & Unidentified Persons System. No other information has been shared.

At only 14-years-old, Erika Brown went missing from Philadelphia, Pennsylvania. The young teen vanished on May 16, 2006, and there are very few public details made available about her case. Some people claiming to be old friends who remembered Erika have come forward with their memories of her, but that doesn’t bring investigators any closer to locating the missing girl. Reports state that after she went missing, authorities believed that she was still in the local area. Often, they consider cases such as these to be runaways, but as the years moved forward with no information, her loved ones remain concerned.

A childhood acquaintance of Erika’s commented on Facebook about the missing girl in January 2018:

“I knew Erica at summer camp at NYSP Temple. In Philly 2004-2006 I believe. She mentioned family members moving in and not feeling comfortable. I was only 14 so you listen but you don’t really know what to say. It wasn’t until 2006 when I saw her missing picture I realized this was my camp friend. I always wondered what happened and occasionally look. This was 10 years ago and a lot has happened in my life so I cant really recall all our interactions. But I remember her being unique and having her own sense of style. I hope she’s safe and sound. It haunts me til this day i almost remember her hinting at running away but I cant be certain of it, it was such a long time ago.”

If this is true, why Erika didn’t feel comfortable? What was it about these family members that made her feel uneasy? And who were they? 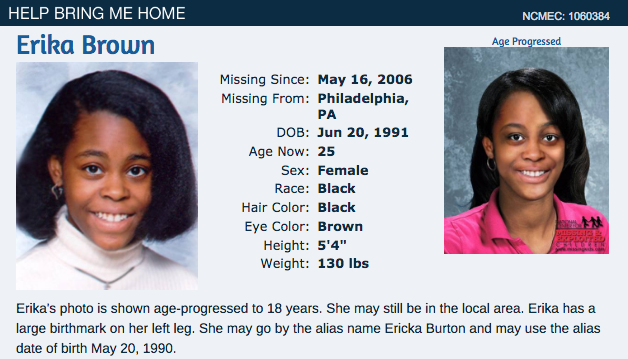 At the time of her disappearance, Erika Brown was 5 feet 4 inches tall and weighed 130 pounds. She had black/dark brown hair, brown eyes, and a large birthmark on her inner left thigh. Both of her ears are pierced. Authorities also said Erika is known to go by the name “Ericka Burton” and an alternative birthdate of May 20, 1990 (her real birthdate is June 20, 1991).

Anyone with information regarding this case is urged to contact the Philadelphia Police Department at (215) 685-3257, the National Center for Missing & Exploited Children at 1-800-THE-LOST, or their local authorities.

Please share this story about Erika Brown to help reignite the investigation into this case. She is our sister and her life matters.