Daycare workers were growing concerned for two sibling toddlers, C.J. and Monai, who were left in their care. Their mother, Trukita Jaquita Scott, also known as “Kita,” was due to pick them up at 2:00 p.m. on June 25, 2014, but she didn’t show up. Around 4:00 p.m. that same day, Trukita sent a text message to her fiancé, Al Livingston, telling him she loved him before her phone was shut off. Mysteriously, the following day, the Ft. Lauderdale resident’s cell phone was turned on once again. Yet, no one has been able to locate or contact Trukita in years.

“My heart sank when she didn’t answer the phone,” Trukita’s mother, Kengeral Allen-Scott told the Sun Sentinel. She called her daughter 23 times on the day she disappeared and said she knew that something wasn’t right.

During the investigation, police checked on the location of her cell and it showed that the mobile pinged at varying locations around the south of Florida. As loved ones waited impatiently for news, investigators were notified that the 24-year-old’s vehicle, a gold 2007 Nissan Altima, was located in Miami abandoned in a Liberty City neighborhood. Video surveillance at Trukita’s U-Haul job showed her leaving before heading out to Liberty City to meet up with her ex-boyfriend, also the father of her son, Carl Monty Watts. Trukita also worked as a caregiver for mentally disabled adults and had dreams of one day working as a police officer.

“She didn’t want to work anywhere else,” Miami Gardens Police Officer Carmelo Garcia said. “She grew up here; she knew a lot of people. She wanted to make changes.”

Of course, Watts became a person that the police were interested in speaking with. His criminal history didn’t help him either, as he had been previously arrested on charges of kidnapping and sex offenses. It came to light that his relationship with Trukita Scott was often violent, with witnesses claiming that Watts was physically abusive.

Jeffrey Davis, Trukita’s supervisor, told NBC Miami that after witnessing years of arguments between the couple, he had to file a restraining order against Watts to keep him from showing up at Trukita’s job.

“He used to try and grab her and take her outside and I would have to confront him,” Davis said. “She even said one day she had the feeling she might not come back.”

Police searched for Watts but he was always one step ahead of them. Finally, weeks after anyone had contact with Trukita Scott, Watts turned himself in to police to face charges of violating the conditions of his supervised release stemming from a federal weapons conviction. What was the violation, you ask? Well, just one month prior to Trukita’s disappearance, Watts was arrested and later charged with battery and false imprisonment for attempting to force a teenage girl into his car. She had been waiting at a bus stop. Relating to that case, Watts pleaded guilty. He was sentenced to 11 months in prison and was released after serving that term.

“He was crying. He was very upset because he sees me upset,” MissEllison, Watts’s mother, told NBC Miami in 2014. “He said, ‘I had nothing to do with Kita’s disappearance.'”

As far as Watts’s statements regarding Trukita’s missing person case was concerned, they weren’t consistent at all. Initially, Watts told police that he did see Trukita the afternoon she disappeared. However, police knew that wasn’t true because they already had evidence that proved at that time Trukita was out running errands with her mother. When confronted with that information, Watts switched up his story and said that he had never met up with her. It was later revealed through phone records that the former couple spoke that day and Watts was in or around Liberty City, where Trukita’s vehicle was found.

Livingston, Trukita’s fiancé, now has custody of their daughter Monai.

“She’s always saying her mom is with God. She asks about her mom every single day,” said Livingston. “The older she gets, the more she remembers and she’s not letting go of it.”

“We do investigations based on physical evidence, as opposed to hunches or a gut instinct, and that is what we’re looking for – physical evidence that will lead us to where Miss Scott is,” police spokeswoman Deanna Greenlaw said. 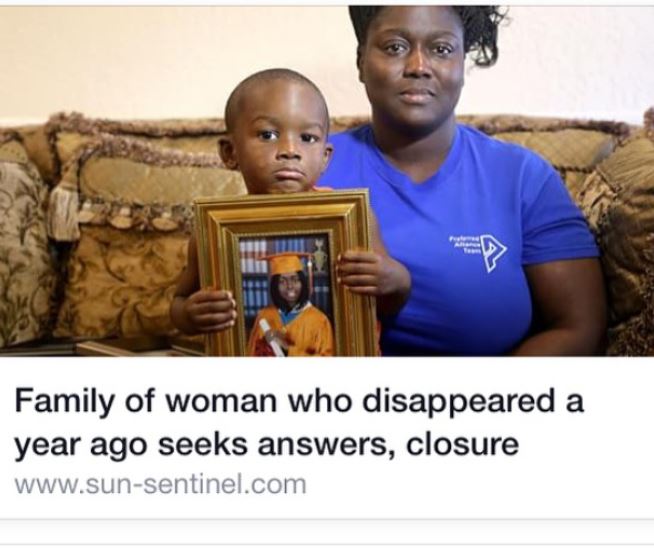 No charges have been filed in Trukita’s case, and she is still a missing person. At the time of her disappearance, Trukita was 5’6″ tall and 135 pounds. She had black hair, brown eyes, and was last seen wearing a khaki U-Haul uniform shirt, black pants, and black Reebok sneakers. Trukita also has a number of tattoos, including the name “Alfred” on her abdomen, a butterfly on her lower abdomen, the word “Loyalty” on her chest, and a rose in the center of her chest. Both of her ears are pierced.

Anyone with information concerning this case is urged to contact the Broward County Crime Stoppers at 954-493-TIPS (8477). You can remain anonymous.

Please share this story regarding the disappearance of Trukita Scott to help reunite a missing mother with her children. She is our sister and her life matters.

Deborah Saucier Has Been Missing Since January 10, 2019