Attendees at Liberty Temple Church in New Jersey were surprised when they heard someone banging loudly on their doors in the early days of December 2000. When they answered, they found two-year-old Aesha Amera Muhammad at their doorstep, alone. He didn’t look disheveled and seemed to be quite healthy, but he did wet his pants. The mystery person who knocked was long gone.

“I’ll never forget that day because it was so unusual,” Reverand Robert Jiggetts said. “When they brought the boy to me I thought he was a member of the congregation. I held him up near the end of the service and I said, ‘Whose child is this?'”

Little Amaru was crying and understandably afraid, but church staff couldn’t get much information from him. He was able to tell them his first name, and that’s about it. Members of the church wanted to help the little boy, so they obtained diapers for him while the staff attempted to find his parents.

It took days to identify Aesha Amera Muhammad, and soon he was back in the custody of his family. However, the story he told was a frightening one. He shared with the police that his mother was dead because “they were fighting. Mommy was bleeding…Mommy got hit with a rock” and a man “punched my mommy in the face and she was bleeding. I was fighting him and Mommy was fighting him.” 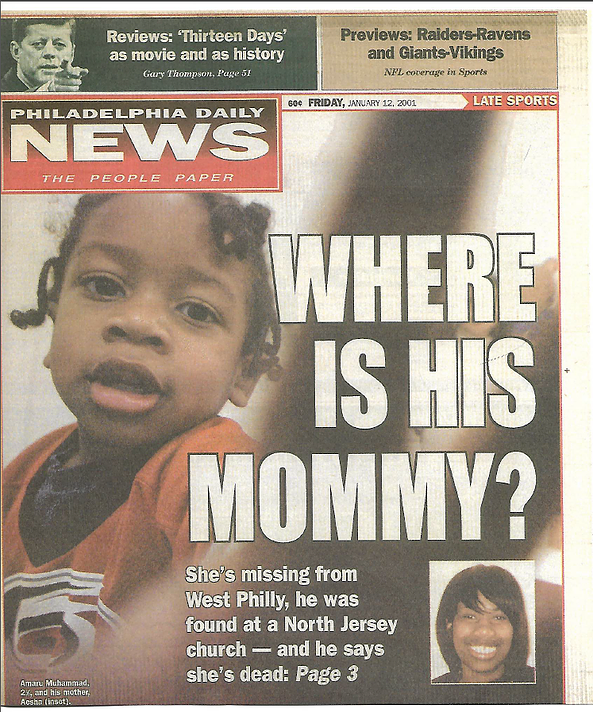 Amaru’s mother, 23-year-old Aesha Muhammad, was enrolled in beauty school and working at a salon in Philadelphia. She and her sister Rasheedah Doss were once roommates, but because of her schedule, Aesha needed to move to be closer Venus Beauty Academy where she was taking classes.

She made the decision to rent a room from 57-year-old Charles Dockins, her father’s half-brother, according to reports. He ran a boarding house, however, the living situation became a volatile one, as Aesha and Dockins often argued.

On November 30, 2000, Aesha’s brother Solomon Muhammad said she couldn’t take it anymore. She had reportedly packed her things and planned on leaving the residence that day.

“She told me she wanted Wakhita to come get her because she and Dockins had been arguing,” he said. Solomon didn’t have a vehicle, so, he called on their sister Wakhita Doss who came to his home to help. Wakhita desperately tried to reach Aesha, but calls went unanswered, including those made to Dockins’s home.

Upon receiving news that his daughter was missing, Aesha’s father, David Muhammad, traveled from Atlanta to Philadelphia to find his child. Aesha’s family gathered together and went to Dockins’s home. There, they found a perplexing scene: Aesha’s room was cleared out. The only things left were a dresser, a bed, and a single sheet on the mattress.

Thankfully, Amaru had been reunited with his family. Unfortunately, it has been almost 20 years since Aesha vanished and she has not been found, nor have arrests been made in connection with her disappearance. According to reports, two-year-old Amaru did name the person who he said killed his mother, however, the name of the person has never been made public.

Police are treating Aesha’s missing person’s case as a homicide.

“She’s been missing a long time. She was a competent and caring mother and, after putting our heads together, we’ve taken over this case because it appears foul play might be involved,” said Lt. Mark Deegan, commander of the Homicide Division’s Special Investigations Unit.

“I already know how this is going to turn out,” said Aesha’s father. “My daughter’s gone. I just want to recover her.” He added, “If anyone could help bring this to closure, bring this to an end, they could bring peace to us. This is really destroying us.”

Investigators questioned Dockins on multiple occasions, according to reports. He is said to have given differing accounts of events on at least two occasions. Police had scheduled for him to take a polygraph test in January 2001, but he never showed up. Dockins was on parole after being released from prison following a stint for burglary and aggravated robbery. He soon vanished and stopped checking in with his parole officer. In July 2001, Dockins was picked up on an outstanding warrant in Camden, New Jersey, and taken back to prison.

At the time of her disappearance, Aesha was approximately 5 foot 8 inches tall and weighed 135 pounds. Her last name is sometimes reported as being spelled “Muhammed.” There is a gap between her two front teeth and she has a small scar on her abdomen. She was 23-years-old went she went missing and would be 41-years-old at the time of this publication in 2019.

Anyone with information is urged to contact the Philadelphia Police Department at 215-686-3184 or their local authorities.

Please share this story concerning the disappearance and possible murder of Aesha Amera Muhammad to help reignite the investigation into her case. She is our sister and her life matters.

Anna Marie Zirkle Went Missing In 1997, Believed To Be Murdered