It’s unbelievable that a child can disappear and turn up murdered, and all you can find on the internet about the case is a brief paragraph. On September 18, 1992, eight-year-old Shamonica Brown disappeared around 6:00 p.m. Police searched for the little girl in her hometown of Saginaw, Michigan, but they weren’t able to piece together where she’d gone. They’d learn that she suffered a tragic fate four days later when her body was located.

The body of Shamonica Brown was found by police on the steps of the former Holy Rosary Catholic Church on South 13th Street. She’d been hidden behind a bush inside of a planter. Shamonica was reportedly only a few short blocks from home. 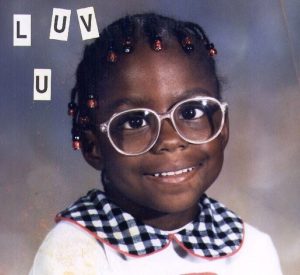 It’s reported that investigators had two suspects in mind, however, they’ve since died. Without more information to propel this near-30-year-old case to a resolution, the callous murder of Shamonica remains unsolved and forgotten. How she died and other gruesome details haven’t been shared, but the beautiful little girl was buried at the Forest Lawn Cemetery in her hometown.

A news clipping about the case shows that an unidentified publication spoke with Shamonica’s principal at Heavenrich Elementary School where she was a first-grade student. “Our worst fears have been realized,” Lawrence Wells reportedly said at the time. “This is a nightmare.” A little bit of searching turned up an obituary for Andy “Charles” Smith, and Shamonica Brown’s name is listed as his daughter. However, it’s unclear if it’s the same person. He passed away in 2017. 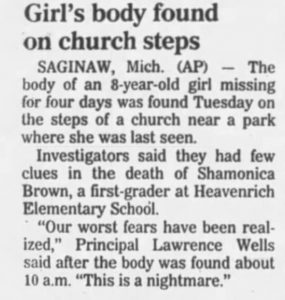 Anyone with information regarding this case is urged to contact their local authorities or Crime Stoppers at 1-800-422-JAIL.

Please share this story about the murder of eight-year-old Shamonica Brown to continue the conversation about her case. She is our sister and her life matters.

Matrice Washington, 32: Vanished From Detroit In 2008