Home » Pamela Mayfield, 5, & Her Brother Michael, 6, Were Last Seen In A Stranger’s Car

The City of Houston, Texas still has a mystery of two missing children that has gone unsolved for decades. The number of young children who still walk to and from school isn’t as great as it was back in the 1970s. It was common for kids to foot their way around their neighborhoods, and in 1978, that’s exactly what six-year-old Michael Mayfield and his sister, five-year-old Pamela Mayfield, did on January 10, 1985.

According to reports, Michael and Pamela were students at Betsy Ross Elementary School. The siblings were both enrolled in a kindergarten class because it was decided that Michael would repeat his year. For some unknown reason, it was said that Michael was deemed to be too young the first time around.

The young siblings attended school on January 10 and walked home together—something they’d done numerous times. It’s reported that they were spotted playing together at a local park and witnesses claimed to have seen them getting into a green car. Other witnesses reportedly saw the siblings in the backseat. An unidentified man was reported to be behind the wheel, but an exact description of the car has not been shared with the public.

“I [cry] at night sometimes thinking about them,” Cynthia Hunt, Michael and Pamela’s mother, told KHOU News back in 2016. “They wanted to walk home from school and I told them okay, they can walk.” She added, “[I feel hurt]. I’ve seen a lot of kids come up missing. I always said, ‘I hope I will never have to go through that,’” Hunt said. “Then I did have to go through it… I still see them as those two little kids. My two little kids. They liked to talk, have fun and play.”

Reports are divided when it comes to the status of this case. Some state that the children are being treated as a non-family abduction. Other reports claim that investigators believe that Pamela and Michael were taken by a relative. 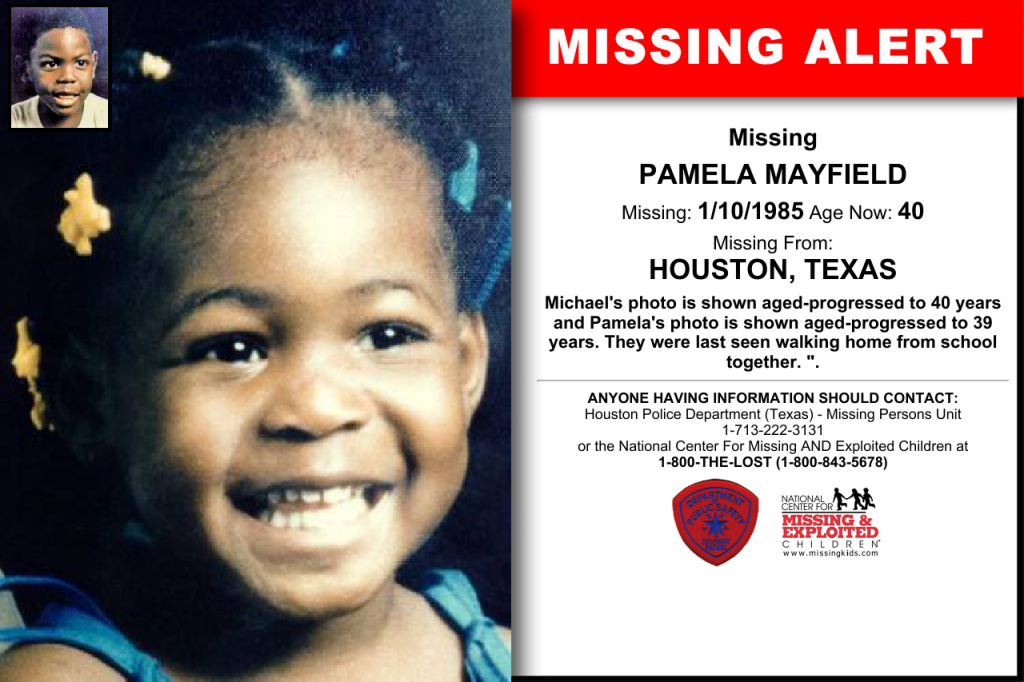 At the time of her disappearance, Pamela was described as being 2 feet 9 inches tall and 50 pounds. She had black/dark brown hair and brown eyes. Both of her ears are pierced.

At the time of his disappearance, Michael was described as being 3 feet tall and 75 pounds. He had a burn scar on his right wrist and some reports state he stuttered.

Anyone with information regarding the disappearances of these two children is urged to contact the Houston Police Department at (832) 394-1872 or their local authorities.

Virginia Rambus, 19: Vanished In Her Own Apartment Complex