Home » Tynesha Stewart, 19, Was Murdered & Dismembered By Ex-Boyfriend In 2007

Nineteen-year-old Tynesha Stewart was like many other young college students. She was a first-year student at Texas A&M University studying Civil Engineering and when it was time for her to go home for Spring Break, she was excited. She would be able to tell everyone all about college life and the new people that she had met, including starting a new relationship.

One person who wasn’t happy to hear that Tynesha was moving on with her life was her 27-year-old ex-boyfriend, Timothy Wayne Shepherd. During her short time home, Tynesha agreed to meet up with Shepherd at his apartment. Their conversation turned tense when Shepherd was pressuring Tynesha to give details about her new boyfriend, but she resisted. On March 15, 2007, Shepherd claimed that it was then that Tynesha grabbed a knife from his kitchen table and charged at him before he strangled her.

I miss you man .You came to my game that morning and said you'll see me later at the concert #R.I.P Tynesha Stewart pic.twitter.com/dw4rEmVK2R

“I snapped,” Shepherd explained. “First, I was afraid she was going to stab me. But then, all the animosity for the argument came out. I don’t know if I was holding my breath, but I blacked out. I was conscious, but not really. It was out-of-body.”

To call that explanation unacceptable is an understatement. If you think that Tynesha’s murder was heart-wrenching enough, you have yet to hear about Shepherd’s actions following the killing.

Shepherd told a judge that once he realized that Tynesha Stewart was dead, he had to “cover his tracks.” He went to a hardware store and bought a saw that he later used to dismember her body. Using the two barbeque grills on his patio (one of which belonged to a friend), Shepherd spent days methodically roasting Tynesha’s body. The stench haunted the neighborhood and residents recalled the horrific smell. Hoping not to arise any suspicion, after charring Tynesha’s body for days, he threw away the grills and went to dinner with a friend. 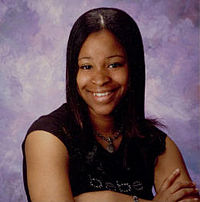 “The smell was awful,” said Louis Evans, a neighbor who lives across from Shepherd. “I was wondering: What is he burning? Not cooking, but burning. There is a difference… I just don’t know what to think about it,” Evans continued. “I thought he was a nice normal person. I guess you never know what your neighbors are doing.”

After Tynesha Stewart went missing, Shepherd became the number one person of interest. Initially, during questioning, he denied ever seeing his ex-girlfriend or having anything to do with her disappearance. Investigators put on the pressure, but the murderer wouldn’t budge from his story. Finally, after over ten hours of interrogating, Shepherd reportedly wept as he gave details of how he killed and dismembered Tynesha’s body. Little of her remains were found, but police were able to locate some of her teeth for identification purposes.

Shepherd was arrested and charged with first-degree murder. In October 2008, a jury deliberated for only four hours and handed down a guilty verdict. He was sentenced to 99 years in prison and ordered to pay a $10,000 fine.

Tynesha Stewart is remembered by family and friends as a young woman with a bright future. She may have been a victim of murder, but her light continues to shine in and through all who loved and were inspired by her.