Home » Breonna Taylor Was Killed By Police For No Reason — #SayHerName

Recent news reports have been plagued with police misconduct, and while people protest the deaths of Sean Reed and Ahmaud Arbery, I’d like to talk about the slaying of our sister Breonna Taylor. According to a lawsuit filed against the Louisville Metro Police Department in Louisville, Kentucky, Breonna Taylor and her boyfriend Kenneth Walker were asleep in their apartment. Without warning, officers descended on their home and issued a “no-knock” search warrant—meaning they stormed inside without announcing themselves and had a warrant justifying their legal right to do so. They were in plainclothes and looked like civilians, not to mention they arrived on the scene in unmarked vehicles.

Breonna, an EMT worker, and her boyfriend thought that the officers were home invasion burglars breaking into their apartment. Walker, who reportedly had a license to carry firearms, brandished a weapon believing that he was protecting his home and his property. At this point in the story, accounts of what happened begin to shift. Police say Walker fired a shot and hit an officer. What resulted was a barrage of shots returned by police. Breonna, 26, was hit eight times and died at the scene. Walker, 27, was arrested and charged with assault and attempted murder on a police officer.

It was later learned that officers were investigating a man they already had in custody who they suspected ran a drug house nearly 10 miles away from Breonna’s home. Breonna and their suspect were acquaintances, and because police had seen them together, they decided to swarm her home. Following the incident, the Louisville Metro Police Department claimed that the three officers on the scene did knock on the door several times, and when no one responded, they forced their way inside and claim they were accosted with gunfire. They also said they made it clear that they were police officers, an assertion that Walker denies.

The three officers in question have been named as Jonathan Mattingly, Brett Hankison, and Myles Cosgrove. They’ve reportedly been reassigned pending a thorough investigation. They have not been charged or arrested. Charges against Kenneth Walker have been dropped. 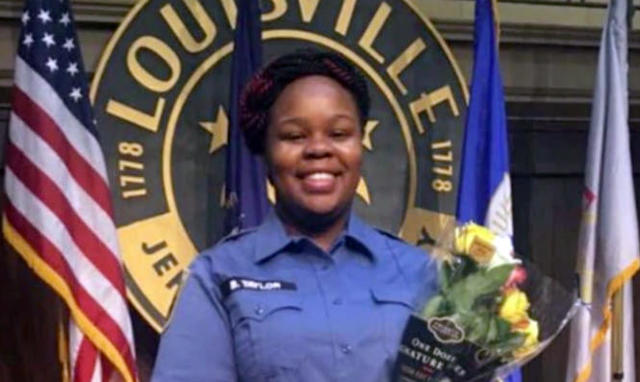 “The defendants then proceeded to spray gunfire into the residence with a total disregard for the value of human life,” the lawsuit states. Breonna’s mother, Tamika Palmer, filed the suit alleging wrongful death, excessive force, and gross negligence. “Shots were blindly fired by the officers all throughout Breonna’s home.” It’s reported that approximately 20 shots were fired by officers.

Attorney Ben Crump is representing the family of Ahmaud Arbery and now, the family of Breonna Taylor. At a press conference held on Wednesday (May 13), he said, “Breonna Taylor was sleeping while black in the sanctity of our own home… We cannot continue to allow them to unnecessarily and justifiably kill our black women and escape any accountability.” He said that Breonna Taylor was “completely innocent,” adding, “black women’s lives matter, too.”

Louisville Mayor Greg Fischer tweeted on Tuesday (May 12), “As always, my priority is that the truth comes out, and for justice to follow the path of truth.”