Home » Stephanie Goodloe: Murdered As Daughter, 11, Was In The Next Room

An 11-year-old girl’s world was shattered on a fateful day in 2016. She was in a bedroom at home when she heard a series of popping sounds. They were immediately followed by her mother’s screams and then, she saw a man dash by her doorway. Frightened, the pre-teen jumped into action and called the police for help. Unfortunately for her mother, youth minister Stephanie Goodloe, emergency responders couldn’t save her life.

Police in Washington, D.C. investigated the murder of 40-year-old Stephanie Goodloe and turned their attention to her ex-boyfriend, Donald Hairston. Just days before Stephanie was murdered in front of her daughter, she had filed a restraining order against 49-year-old Hairston. She cited instances of domestic violence as the reasoning behind wanting legal protection against her ex. Stephanie had become so frightened that she began documenting incidents months before she was killed, including when Hairston repeatedly showed up to her home unannounced or slashed her tires. There was a time when Hairston lived with Stephanie and helped raise her daughter—a young girl who had looked to him as a father figure since she was just a toddler and called him “daddy.”

Two years after the murder in 2018, Hairston stood in front of a judge and denied that he had anything to do with the murder of his ex-girlfriend. “I couldn’t have been there,” he reportedly stated as members of Stephanie’s family angrily exited the courtroom. Hairston’s trial had been an uphill battle for prosecutors as there was no DNA evidence or weapon found to tie him to the killing. His mobile phone was even tracked and according to reports, it pinged miles away from Stephanie’s home at the time of her murder. 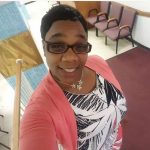 The deceased woman’s friends and family members took to the stand one by one, recounting instances where Hairston showed violence or controlling behavior. Some testified that Hairston even stole Stephanie’s keys in order to have access to her home and vehicle without her consent.

During the trial, it was the 911 call from the 11-year-old daughter of Stephanie Goodloe that evoked an emotional reaction.

“I’m so scared. I’m scared. Please come. I heard shots. I don’t know what to do. I’m only 11,” the little girl is heard saying on the call. She told the dispatcher her address and then added, “I didn’t see anything. My head was under the covers. I think it was a man. I think it might have been my stepfather. Please help me.”

Because the young girl didn’t say for sure that Hairston was the man responsible for the murder on the call, defense lawyers argued their theories of reasonable doubt. They introduced scenarios where another person could have been responsible, however, at trial, the then-13-year-old recounted that somber day when she lost her mother. The teen told a jury she was “100 percent certain” that Hairston killed Stephanie Goodloe.

In the end, a judge and jury handed Hairston his fate. He was sentenced to 49.5 years in prison.

“Mr. Hairston was the only father [Goodloe’s daughter] knew. And in one swoop, [he] deprived her of both of her parents, unmindful of the collateral damage to her. And disregarding the impact it would have on her,” said the judge.

Stephanie’s daughter has been placed in the care of her grandmother.

Stephanie Goodloe called the police. She filed a restraining order. She kept notes of harassment. Still, her life was taken. Please share Stephanie’s story with the hashtag “#ProtectBlackWomen” to raise awareness about this case and the need to rally around our women. She is our sister and her life matters.

Benita Woody Was Last Seen In Her Vehicle On August 5, 2020