In 2008, James Guilford was convicted of the murder of his girlfriend,  Sharon Nugent. One year prior, 27-year-old Sharon disappeared, and after police interrogated Guilford, he confessed to killing her. He reportedly told authorities that he’d beaten Sharon to death and tossed her remains in a dumpster—and until this day, she’s never been found. Following his trial, Guilford’s attorneys were awarded a legal victory after his conviction was overturned due to the manner in which his confession was procured.

When Guilford was initially questioned by investigators, he was reportedly interrogated for 49 hours, and,  according to his legal team, he wasn’t in his right mind when he confessed to the crime. However, Guilford had made himself a prime suspect; the day he reported Sharon missing, he reportedly took off and traveled from their Syracuse, New York home to Georgia, taking a hammer with him. When police checked Sharon’s residence, they found a harrowing scene. There was blood matter clearly seen on the walls and a bloodstained mattress that told a tale of a fatal incident.

Guilford’s hammer found with him would later be tested and Sharon’s blood was found on it.

It took years for James Guilford to face another trial, and the second time around in 2014, a jury of his peers once again found him guilty of murder. The judge came down on Guilford during sentencing.

“You treated Sharon Nugent like a piece of garbage. There are no reasons, no excuse for what you’ve done,” said the judge. “If I had in my power Mr. Guilford, I would sentence you to spend the rest of your life in a garbage dumpster.”

Guilford was sentenced to 25 years in prison to life. 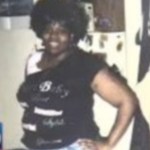 “I cannot convey to you the amount of pain he caused by taking my firstborn child,” said Patricia Alexander, Sharon Nugent’s mother, at the time. “I thought the years had enabled me to forgive Mr. Guilford, but to see him show no remorse, or to finally admit what he did, to let us know where her body is so we can have some kind of closure, (that) has made me feel more bitter than before.”

Patricia has been caring for Sharon and Guilford’s three children.

“My three beautiful grandchildren are now growing up without their mother,” she said. “He has robbed my daughter of the chance to see how beautiful they are, and to love them, and to nurture them. I am a loving grandmother but I can never replace a mother’s love. They ask questions I can never answer… They still hurt, they feel the pain of what happened to their mother. It pains me not to be able to say goodbye in some way. I will forever keep hoping that I will have that opportunity to say goodbye to my child.”

Before sentencing, Patricia asked the judge to impart the harshest sentence, and the judge complied. However, Guilford’s sentence is open to the possibility of parole.

At the time of her disappearance, Sharon Nugent was 5 feet 5 inches tall and weighed 210 pounds. She had black/dark brown hair (she was wearing a shoulder-length burgundy and black wig) and brown eyes. Sharon was last wearing a black, puffy trench coat.

Anyone with information regarding this case is urged to contact the Syracuse Police Department at (315) 442-5111 or their local authorities. Her agency case number is 07-140043.

Please share this story about Sharon Nugent to hopefully bring her home so that her family may lay her to rest. She is our sister and her life matters.