The loved ones of Calandra Beverly have been trying to spread the word about her missing person case. Information is scarce and I haven’t come across many news reports about Calandra’s case, but I’ve included what I could gather from agencies and her friends who regularly update via Facebook. It’s reported that in December 2019, Calandra was staying with relatives in North Las Vegas, Nevada. She’d arrived there on December 1, but a few days into her stay, she reportedly got into an argument with her family and decided to leave.

It’s stated that Calandra Beverly’s last post shared on social media was on December 8 where it shows that she “checked-in” in the city of New Orleans, Louisiana. On January 10, Calandra reportedly spoke to her aunt on the telephone and revealed that she’d traveled to New Orleans to “heal.” That is the last time any of Calandra’s loved ones have heard from the 26-year-old. Reports will vary about Calandra’s last date of contact as some will list December 2019 and others will state January 2020.

Calandra seems to have a core group of friends and family that care about her and because she has a history of traveling for work, some believe that police aren’t looking into her case as thoroughly. One person wrote on Facebook that she’d had background touring with Ringling Bros., and it’s been reported that Calandra has connections to Texas, Ohio, and California. A report also notes that she could be “in the company of a truck driver.” 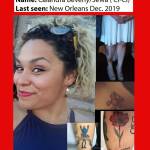 At the time of her disappearance, Calandra Beverly stood 5 feet 8 inches tall and weighed 245 pounds. She has brown hair and brown eyes. Her middle name is “Victoria,” she goes by the nickname “CiCi,” and may go by the last name “Sewa.” Calandra reportedly has her ears pierced, a mole on her nose, and a series of tattoos including musical notes, a blue figure with a banner reading “existence is pain,” a red flower, a sunflower, a bird, and a train.

Please share this story about Calandra Beverly to help bring her home. She is our sister and her life matters.