Fonda Gandy, 41, Was Murdered By Teen She Tried To Help

Women should be able to travel, patronize businesses, shop, and simply move around without worrying about being assaulted. It was approximately 12:30 p.m. January 16, 2021, when 29-year-old Shadina Smith had reportedly just left her apartment in New York City when a man allegedly groped her as made her way out to the street. According to reports, Shadina did what many women would do and returned home to alert her 26-year-old fiancé about the man. The two left their Harlem apartment to confront him and minutes later, Shadina was murdered. 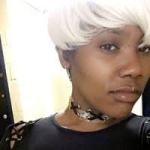 On the first-floor hallway of their apartment building, the man shot both Shadina and her fiancé. She was unresponsive when police arrived, but Shadina’s fiancé was described as being “conscious and alert.” He was injured in his left arm and chest, and after being treated at a local hospital, he was released. His name has been withheld from the public.

Shadina was shot three times and was rushed to the hospital, but was later pronounced dead.

“It’s been a horrific nightmare situation,” said Shadina’s aunt, Corine Booker. Shadina was the mother to one-year-old Uriel, who she devoted her life to raising. “She was very invested in her son and his future. I hate that he won’t be able to know how wonderful and how resilient she was. We just want to make sure to give him all that love.”

The gunman has yet to be located. Police have not shared if they have any suspects or persons of interest.

A GoFundMe campaign was set up to help Shadina and her family during this difficult time. You can find it here.

Please share this story about Shadina Smith to help raise awareness about sexual assault. She was our sister and her life matters.

Fonda Gandy, 41, Was Murdered By Teen She Tried To Help