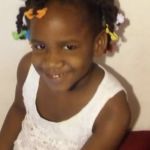 Then, near Harold’s Chop Suey Restaurant on Union Boulevard where Jurnee and her family were waiting for food, shots rang out. It was only two blocks away from the high school’s event. Fights continued to break out in various locations, so the police were dispatched to the scene. As they were attempting to control the crowd, someone opened fire near the restaurant.

Two 16-year-old boys were shot, one reportedly multiple times while the other took one bullet to the arm. Another bystander, a woman said to be in her 60s, was injured after being shot in the leg. They have all reportedly recovered from their injuries, but sadly, little Jurnee Thompson wasn’t as lucky. The eight-year-old lost her life in a brazen act of senseless violence.

Investigators pleaded with the public for help in identifying the person or persons responsible, but while there were persons of interest questioned at the time, there haven’t been any reports of an arrest. One of the teens who was injured during the shooting told police that he wasn’t the target of the attack. According to reports, it seems to be a random act that resulted in the most unfortunate of circumstances.

Following the attack, witnesses told authorities that a man rushed to Jurnee’s aid, but he hasn’t been publicly identified.

“Jurnee was like a young woman with an old soul,” Jurnee’s father previously told local reporters. “I think people just need to wake up and realize the value of a life.” In 2019, Jurnee reportedly became the 12th child to be killed in the city of St. Louis. “It was one of the biggest fears of my life and now I’m living it as a reality.” The grieving father added, “Why would you take my baby away from me?”

The City of St. Louis offered a $100,000 reward for information leading to the arrest of Jurnee’s killer and three other children who lost their lives to gun violence that year. Jurnee’s case remains unsolved. You can read her obituary here.

Anyone with information about this case is urged to contact CrimeStoppers at 1-866-371-8477.

“If you or someone else you know may be hiding a shooter, please turn them in,” said Public Safety Director Jimmie Edwards. “Your failure to turn in people that have committed these type of offenses may also cause you to be charged with a crime.”

Please share this story about Jurnee Thompson to continue the conversation about gun violence and to help bring closure to this case. She was our sister and her life matters.