It’s with a heavy heart that I report that the remains of 10-year-old Breasia Terrell have been located and identified. Last July, just a week after Breasia was reported missing from Davenport, Iowa, I shared her story in hopes that the young girl would be returned to her loved ones safe. Sadly, it was confirmed by authorities during a press conference on Wednesday (March 31) that Breasia had passed away.

Her case is reportedly being investigated as a homicide. 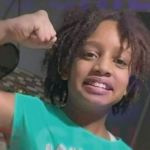 “An autopsy on the remains was conducted by the Iowa Division of Criminal Investigation and we have received confirmation that the remains are those of Breasia Terrell,” said Davenport Police Chief Paul Sikorski. “This investigation continues to be a joint investigation by the Davenport Police Department, the Division of Criminal Investigations from the Iowa Department of Public Safety and our partners at the FBI. I can assure our community that investigators are working diligently to bring justice on Breasia’s half. Again, they have been nonstop for the last 9 months. I want to assure our community that when we are able to share details on this investigation we will.”

According to KCRG, a fisherman stumbled across Breasia’s remains last Monday in a “rural area north of DeWitt just off of Highway 61.”

Back in July 2020 when Breasia first went missing, it was reported that the 10-year-old disappeared sometime between Thursday evening on July 9 to Friday afternoon on July 10. It’s said that Breasia was with her brother while he was visiting his father, 47-year-old Henry Earl Dinkins, when she vanished. They were reportedly at an apartment on East 53rd Street. Hours after her disappearance, Davenport police arrested Dinkins on an unrelated charge but in an AMBER Alert for Breasia, authorities listed Dinkins as her “abductor.”

The AMBER Alert was canceled in January 2021 due to the length of time that passed since Breasia was reported missing.

Breasia’s mother reportedly released a statement regarding this tragic news to the National Center for Missing & Exploited Children. “Words cannot describe the heartache and emptiness that we feel now that police have confirmed the remains located in DeWitt, Iowa are Breasia,” said Aishia Lankford. “Our love for Breasia has gotten us through the past nine months and will continue to see us through as we fight for justice. We want to thank the community, law enforcement, friends and family who have put in countless hours to help bring Bree home. We ask for privacy as we grieve the loss of our daughter, sister and friend. Our focus will now be on seeking answers to what happened on the night she was last seen.”

This case is ongoing. A cause of death has yet to be shared. I send my sincerest condolences to Breasia’s loved ones.

Please share this story to help bring justice for Breasia Terrell. She is our sister and her life matters.