*UPDATE* Three men have been arrested for the murder of Jaslyn Adams: Devontay Anderson, 21; Demond Goudy, 21; and Marion Lewis, 18. Investigators allege the shooting was orchestrated against Jaslyn’s father.

Investigators in Chicago are still searching for suspects responsible for the callous death of a seven-year-old girl. On Sunday (April 18) afternoon, it’s reported that Jaslyn Adams was with her 29-year-old father, Jontae Adams, in a McDonald’s drive-thru when they were both ambushed during a violent attack. 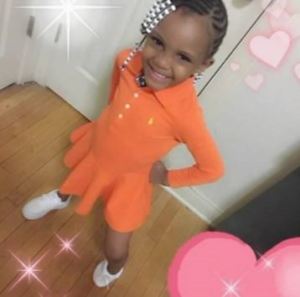 A McDonald’s employee reportedly told authorities that as Jaslyn and her father sat inside of their vehicle, two men surfaced out of a nearby car and opened fire on the father-daughter pair. Multiple shots, upwards of 50 claims some reports, were fired at the family before the assailants fled the scene.

It has been stated that Jaslyn Adams was hit multiple times throughout her body while Jontae received injuries to his torso. When officers arrived at the scene, they didn’t wait for emergency responders; they immediately grabbed Jaslyn and loaded her into their SUV for faster transport to Stroger Hospital. When they arrived, staffers pronounced the seven-year-old dead.

Her father reportedly remains hospitalized and is recovering, although his condition is listed as serious.

“Please put the guns down,” said Jaslyn’s aunt, Tawny McMullen. “My eight-year-old baby says she doesn’t want to go out and play because she is scared that she is going to be shot.”

Lawanda McMullen, Jaslyn’s grandmother, told reporters that immediately after being shot, her son called her. “I was frantic and he was frantic. He could not breathe on the phone. He just kept saying, ‘Mom, come get me, they just shot up my baby,'” she revealed. “He couldn’t breathe on the phone. He was just like, ‘Ma, come get me, they shot my baby, they shot my baby up.’ They said she came in with no pulse. [They] opened up her chest and did chest compressions but could not get her back.”

Chicago Mayor Lori Lightfoot acknowledged Jaslyn’s tragic death in a tweet. “I am heartbroken and angered that a 7-year-old child was killed this afternoon on Chicago’s West Side. This unthinkable act of violence has no place here. The epidemic of gun violence cutting our children’s lives short cannot go on.”

I am heartbroken and angered that a 7-year-old child was killed this afternoon on Chicago's West Side. This unthinkable act of violence has no place here. The epidemic of gun violence cutting our children's lives short cannot go on.

Kenisha Dixon: Opened Her Front Door & Was Murdered In 2000

Police continue in their search for suspects. The Daily Mail reports that Jontae Adams has previous drug arrests and was, at one time, accused of being involved in gang-related activities. According to the outlet, police suspect that he was the intended target. At the time of this publication, authorities have not issued a statement regarding their immediate findings or suspicions.

I send my sincerest condolences to Jaslyn Adams’s loved ones during this difficult time. She is our sister and her life matters.