Home » Daphne Jones, 22, Was Pregnant When She Vanished From New Orleans In 1999

A young woman has been missing for over two decades and there doesn’t seem to be any movement on her case. It was just days after the New Year when Daphne Jones reportedly had enough. Reports state that the 22-year-old was a student at the University of New Orleans and moved out of the dormitory into an apartment off-campus. Daphne learned that she was pregnant, so she reportedly decided it was time to leave school, quit her part-time hostess job at Brennan’s Restaurant, and return home to Maryland to move back in with her mother. She vanished before that could happen.

According to reports, Daphne Jones was two months pregnant when she told her boyfriend, who hasn’t been named in reports, that she was moving out. On January 3, she was scheduled to work at the restaurant at 3:00 p.m., however, the expectant mother never arrived. It wasn’t believed that she would walk away from her life or run off because she’d purchased her plane ticket and was scheduled to return to Maryland on January 9, just six days later. 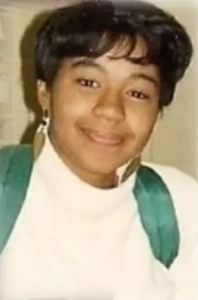 Daphne’s family reportedly stated that the missing woman felt pressure to terminate her pregnancy by the father of her child.

“She refused to have an abortion. She told her mother….and her mother told Daphne to come home so that she could take care of her,” Daphne’s aunt Helena Smith told NewsOne.

Daphne’s grandmother is said to have been the last person to see her as she dropped Daphne off at her apartment. Helena reportedly told NewsOne that her mother had an “eerie feeling” in those last moments with Daphne. “Something told her not to leave but she pulled off,” said Helena.

Later, Daphne’s family convinced the landlord to grant them entrance to her apartment. There, they found a puzzling scene.

“When I went in, she had warmed up some food, the television was on, the iron was on, and it seemed like she left in a hurry,” said Helena. Another report added that the lights were off and the heater was on, as well. In hopes that Daphne would one day return, her father kept a bank account open in her name.

Relatives of Daphne Jones suspect foul play and reportedly believe that she is deceased. Sadly, Daphne’s mother, father, and grandmother have all since passed away. It’s been reported that her mother advocated for her daughter’s return until her last breath.

“If you ask me, it was the grief because she grieved heavily about never being able to solve this,” said Helena of her sister, Daphne’s mother’s, passing. “My mom bared the grief of being the last family member to see her alive.” She also shared a few thoughts about Daphne. “I wish I would have been more open with her in allowing her to be a young adult. You have to deal with young adults as young adults and be open to some things you may not necessarily like, but someone needs to know what’s going on.”

Daphne’s high school classmates launched a scholarship in her honor.

Shirley Anne Gladney Disappeared After Going For a Walk In 1999

At the time of her disappearance, Daphne Jones stood 5 feet 4 inches tall and weighed 130 pounds. She had reddish-brown hair and brown eyes. Agencies describe Daphne as having one Chinese symbol tattoo on her right shoulder. Daphne was last seen wearing a yellow pullover “New Orleans” jacket, blue jeans, athletic shoes, and a silver ring. The Doe Network reports that her dental records are on file. Her middle name is “Philisia.” She would be 44-years-old at the time of this publication.

Anyone with information about this case is urged to contact the New Orleans 7th District Police Department at (504) 244-4600 or their local authorities. Herr agency case number is A-7992-99.

Please share this story about Daphne Jones to help reignite the investigation into her case. She is our sister and her life matters.