Outside of my work here at Our Black Girls, I have a longstanding career as an entertainment journalist, specifically in the Hip Hop and Rap industries. Whenever something occurs that affects members of those communities, I’m personally connected because many of us in Hip Hop consider ourselves to be a family of some sort, whether we know each other or not. I’m here to share the story of Saniyya Dennis, the 19-year-old daughter of rapper 40 Cal, real name Calvin Byrd, who was reported missing earlier this week from New York. Her family has been vocal about their frustrations with authorities because, they say, not enough is being done in the search efforts. 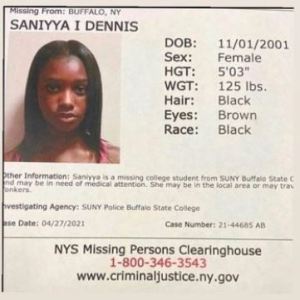 Earlier this week, Byrd shared on his Instagram page that his daughter, a student at SUNY Buffalo State College in New York, was missing. He asked that anyone with information regarding her whereabouts should send him a DM and the concerned father even offered a $10,000 reward.

The following day, he returned to show that he had been pounding the pavement in Buffalo, passing out missing person flyers in the hopes of someone recognizing Saniyya. According to WKBW 7 News, Saniyya Dennis last had contact with her family on Saturday (April 24) and was seen on surveillance footage at Buffalo State leaving the campus at approximately 11:00 p.m.

The local news station reports that Saniyya’s cellphone was tracked and pinged near a cell tower by Niagra Falls at 1:23 a.m. It was later confirmed that Saniyya took a bus to that location but any information regarding what was found on the bus’s surveillance cameras hasn’t been shared.

He has taken to social media to ask Buffalo Mayor Byron Brown why he, or the city’s authorities, isn’t doing more to aid in the search. Julia Stevens from Allies for Black Justice stepped in to help form a search party after learning that police hadn’t constructed a team to help find the missing teen. Weather issues have reportedly kept authorities from launching a helicopter search.

“We’re here to try and bring Saniyya Dennis home safely, end-all, be-all. There’s some information suspecting that her phone was pinged in the Goat Island area, so we’re just making sure that her face is everywhere, that everywhere you go in Niagara Falls, people know to look out for this girl, and hopefully, we can bring her home safely,” Stevens said.

Buffalo State Police Chief Peter Carey told reporters, “The K-9 search in the park took place this afternoon. As we mentioned, for the last two days there was a helicopter going to go up. The weather has not permitted to do that. As time goes on … and the time a person is missing, different steps are taken.”

A spokesperson for Buffalo’s mayor told local reporters that he has been in contact with Saniyya’s relatives.

“Saniyya worked two jobs. She was a mechanical engineering major. She was very focused on her studies. Very studious. She was a good friend. A good person. She has a good heart. She communicates as much as she possibly can,” said Keyora, Saniyya’s sister. “It’s most important to know her character, and this is not like her. This is not of her nature. My mother always says she’s a creature of habit. She took pride in the work that she did. She worked for Project Flight, and she is an OA on campus as well.”

At the time of her disappearance, Saniyya Dennis is described as 5 feet 3 inches or 5 feet 4 inches tall, between 125 to 140 pounds. She has dark brown hair and brown eyes. What she was last seen wearing is unknown.

Please share this story about Saniyya Dennis to help bring her home. She is our sister and her life matters.