Outlets are unclear regarding the last time Avis Anderson was heard from, but the date she went missing is either September 30 or October 1. The 58-year-old was reportedly last seen by neighbors outside of her Tallahassee, Florida home, but she seems to have vanished. Police, as well as Avis’s loved ones, have been pleading with the public for information regarding her whereabouts, but the mystery has carried on.

According to WCTV, Avis is described by her loved ones as a “loving, faithful person.” The outlet also mentioned that she “has her challenges,” which include “struggles with substance abuse.” Avis Anderson was reportedly a member of Tabernacle Missionary Baptist Church as well as the Order of the Eastern Star, but it’s reported that her substance abuse issues had a devastating impact on her life.

Regardless, her loved ones insist that she would never pick up and disappear of her own accord. 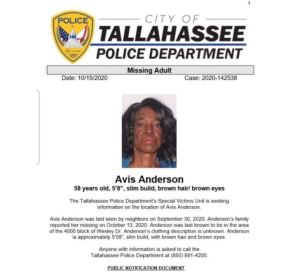 Deliveries and packages were piling up at her doorstep by December as months had gone by since Avis Anderson has made contact. Her relatives have stated that investigations into her bank accounts revealed that there hasn’t been movement since Avis went missing. Eventually, her bills reportedly went unpaid and her home was legally declared “vacant.”

Anderson’s cousin, Zarsa Shakespeare, told WCTV, “We need your help… We just don’t want it to be another young black woman that is missing.” Understandably, Avis’s love ones are terribly concerned but just want to bring Avis home.

“Everyone has their own demons and their own challenges. That does not make her any less of someone we love,” Shakespeare added. “We still love her. We still want her, and Avis, if you hear me, my phone number has not changed. It is the same. Please call. We just want to know where you are, if you’re alright and if you need anything.”

It’s reported that Avis Anderson’s family members were working with Crime Stoppers to implement a reward, but the development of that partnership remains unclear.

Anyone with information about this case is urged to contact the Tallahassee Police Department at 850-891-4200 or their local authorities. Her agency case number is 20-142538.

Shaniece Harris Has Been Missing Since 2017, Car Was Found Abandoned

At the time of her disappearance, Avis Anderson stood 5 feet 8 inches tall and weighed 130 pounds. She has brown hair and brown eyes. Her middle name is “Thomascina.”

Please share this story about Avis Anderson to help bring her home. She is our sister and her life matters.

Asia Martin Went For a Walk & Never Returned In 2005