An unsolved mystery has been plagued with rumors for decades. It was back in 1982 on August 15 when two men were playing soccer in Franklin Park in Dorchester in Boston, Massachusetts. It was reportedly a warm Friday evening when the two men began chasing after the ball and came across a gruesome discovery: a body located “in a thicket of trees and bushes.” The person was later identified as 16-year-old Lucia Roberts (also known as Lucia Kai) and what followed would be rumors that the teen’s death was linked to a secret club of police officers allegedly responsible for her murder. The polarizing controversy continues to be debated today as people weigh truth versus fiction.

Reports state that Lucia Roberts immigrated to the United States at 11-years-old with her mother, Louise Roberts. They came from their African village in Liberia and traveled to Boston in 1977 and upon arrival, they immediately moved in with a family friend. Louise would later tell reporters that “in Africa, we think America is heaven,” and she believed she was making the best decision for her daughter to receive a better education and, in turn, quality of life. 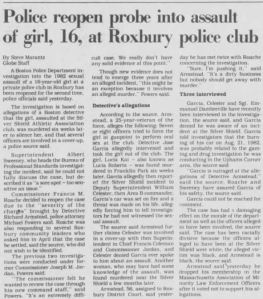 However, no one expected Lucia to lose her life at such a young age. The 16-year-old was found with her red and white striped shirt pulled up while her purple pants were down to her thighs. Boston Police Department Detective Richard Armstead introduced his theory of what happened to Lucia Roberts, and it was a story that would shock a city and put the department in the headlines for years.

According to Armstead, several police officers would meet in secret as the Silver Shield Club and commit a slew of crimes. The detective was at the heart of the case as he is the one who surfaced with allegations that a group of White officers lured a young woman into their care, sexually assaulted and raped her, then murdered her to keep her silent.

A report of the case states that certain officers would pick up prostitutes to sexually assault and it’s alleged that they did the same with Lucia Roberts believing she was a sex worker. It was reported that Lucia may have been in the area trying to purchase drugs so that could have been why she agreed to this alleged ride. The officers are accused of “taking turns” raping the teen before realizing that they had gone too far and strangled her to death.

Armstead was adamant that this conspiracy was being kept under wraps by the Boston Police Department and claimed it ran all the way up to the commissioner. An internal investigation was launched and officers (Jose Garcia-principal witness, William Dunn—primary suspect, William Kennefick-principal suspect) were given polygraph tests. However, in the end, the case remains unsolved because authorities claimed there was no wrongdoing by the officers accused. According to the police department, the accused officers passed their lie detector tests and there was no evidence to prove that the “Silver Shield Club” has anything to do with the slaying of Lucia Roberts.

An archived news report from the Boston Globe reported that Garcia told investigators that he witnessed an officer holding a gun to Lucia as they forced her to perform sexual acts. Later, it is said that Garcia was intimidated; his car was lit on fire in hopes of keeping him from turning. He reportedly later stated that the sexual assault did not occur.

Garcia was said to have told his story to William Celester, Deputy Superintendent of the Boston Police Department, but later, Celester denied having any conversation with the officer where he admitted anything. Yet, it was Celester’s original findings in 1982 that reportedly launched this line of investigation that, in turn, brought on Armstead to further look into the rumors of the murder being police-involved. During a press conference decades ago, there were suggestions that police had an unrelated, unnamed suspect in mind, only noting that the suspect reportedly lived “out of state.” The investigation into the officers was closed.

There were also rumors that one of the officers told Bruce Wall of the Twelfth Baptist Church about the alleged rape of Lucia at the club, but in a video news report about the case, Wall refused to speak about what was or was not told to him.

Anyone with information about this case is urged to contact the Boston Police Department at (617) 343-4470 or their local authorities.

Please share this story about Lucia Roberts to help reignite the investigation into this case. She is our sister and her life matters.