This is a case that requires a somber walk down memory lane. Some of you may already know of Lena Baker, some of you may not. Hers is a story that has been hailed as a great injustice, so much so that she would later be pardoned 60 years after her death.

Lena Baker was born in Georgia to a family of sharecroppers. As a child, she and her siblings were said to have worked cotton fields, much like my grandmother did in rural Georgia, for a White farmer. Lena came from a poor family, so by the 1940s, she would work odd jobs to make money including continuing her work in the fields, washing clothes, and housekeeping. In 1944, a 44-year-old Lena found a job working for Ernest Knight, a White man, as a nurse. At the time, Lena had three children to provide for.

Knight reportedly had broken his hip and needed care and help around his home. Now, what occurred during Lena’s stint as an employee at the Knight residence continues to be debated. Almost everyone agrees that her relationship with Ernest Knight had turned sexual. Some argue that it was consensual, others state that Knight was a cantankerous man who was abusive and allegedly raped Lena Baker.

In April 1944, it is reported that Lena and Knight were at his mill. A trial transcript revealed that the pair were reportedly arguing and had been drinking. According to reports, Knight later showed up at Lena’s home, threatened her, and forced her back to his mill where he held her for the day, abusing and sexually assaulting her. There were rumors that she was his mistress or his drinking buddy, but others claimed that Lena was held as Knight’s sex slave, not his employee.

Lena Baker would tell authorities that while she was locked in the mill, Knight returned and demanded sex from her. When she refused his advances and commands, she claimed that he picked a metal pipe or pole and charged at her. Lena wrestled Knight for control of the weapon and he then produced his gun. The two struggled over the gun, as well, before the firearm was reportedly discharged. Knight was hit and fell dead.

A Black woman in the 1940s who shot and killed her White boss had little defense in those times. It would take four months for Lena’s case to go to trial, and there wasn’t much she could do or say. She claimed self-defense but it was no use. The whole ordeal reportedly lasted four hours and in the end, a jury of 12 White men found Lena Baker guilty and sentenced her to death. Her court-appointed lawyer didn’t call any witnesses on her behalf and following the trial, he dropped the case and moved on.

“What I done, I did in self-defense,” Lena reportedly said in her final statement. “I have nothing against anyone. I am ready to meet my God.” 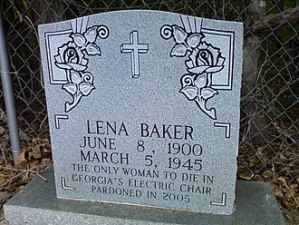 In March 1945, Lena met her fate and was executed via the electric chair—going down in history as the only woman to face execution of that kind in Georgia. She was reportedly buried five miles outside of town behind Mt. Vernon Baptist Church, where Lena used to sing in the choir, in an unmarked grave.  A man named Martin Nimbry was a deacon at the church and spoke to reporters about how the townspeople refrained from talking about Lena Baker, at least not openly.

“There was, like, a hush-hush,” said Nimbry. “They wasn’t saying too much, you know, ’cause they were scared at that time, too. Black folks were scared something might happen to them.”

In 2005, after decades of activism and political pleading, Lena Baker was granted a posthumous pardon. The Georgia Board of Pardons and Paroles reportedly admitted that “the state committed a grievous error” when clemency wasn’t granted. A concrete grave marker was placed on her burial site and activists hoped to create a memorial to highlight this story of what happened to a Black mother trying to provide for her family in the segregated South.

“It’s the right thing. They can give me all the papers they want to,” said Roosevelt Curry, Lena’s great-nephew. “Everybody in this world can talk to me, but you can not—remember that—you can not mend a broken heart.”

Please share this story about Lena Baker to keep her story and memory, alive. She is our sister and her life matters.