Home » Sage Smith, 19: Transwoman Disappears After Meeting Up With Date

Za’Ria Wojtylko, 13: Family Fears She May Have Been Abducted

The dating scene in a social media-driven culture has changed how people develop relationships. Sage Smith was one of many teens who decided to take a chance at love with someone they met online, and her efforts seemed to prove successful. On November 20, 2012, Sage told her roommate, Aubrey Carson, that she had plans to meet up with someone. It was around 6:30 p.m. that evening that Sage was spotted on West Main Street in Charlottesville, Virginia, but the 19-year-old has been missing ever since.

Sage Smith didn’t grow up the way many of her peers did, as she was born Dashad Smith. She lived in the foster care system until she aged out, and at 18, she was living on her own. Her grandmother, Lolita Smith, described Sage as someone who always had a smile on her face and she was proud to see that at 19-years-old, Sage’s life was making moves in the right direction.

In November 2012, the month she went missing, Sage took to social media to share that she was a transwoman and would be living her life as such. She embraced who she was and told her friends on social media to “Respect It,” and Lolita was looking forward to what would unfold for Sage in the future. Sadly, she instead spent years waiting for news about her granddaughter.

“I miss my Sage so much,” Lolita told Dateline years ago. “I would give anything for my baby to walk through the door.”

When Sage didn’t return home from her date, her roommate became concerned and called Lolita, who in turn told Aubrey to contact the authorities. An investigation would uncover that Sage had been texting with a man named Erik McFadden, and when detectives looked into the 28-year-old, they discovered that McFadden told friends he had plans to meet up with someone on West Main Street on November 20.

Repeated calls to Sage’s cellphone went unanswered, and while she was known to keep her phone on and charged, it was later turned off. In the days after Sage disappeared, investigators wanted to speak to McFadden and on November 24, his girlfriend reported him as a missing person. It seems that he never showed up to work and had disappeared without telling anyone.

On November 27, he reportedly called the police and informed them he was in New York, and when he was asked about Sage, he claimed they never met up because she simply stood him up. According to McFadden, he didn’t have any knowledge of Sage’s whereabouts and hung up on authorities when they suggested that he make his way back to Virginia.

Two days after the call, McFadden’s girlfriend reportedly alerted authorities that he was making his way back to Charlottesville and he was prepared for the police to meet him. However, he never arrived, and the girlfriend would say that McFadden decided not to return. He offered up an explanation about Sage Smith when he emailed his girlfriend the following day to say that the teen was blackmailing him with threats that he would tell her that they had sexual intercourse. He admitted to meeting Sage on the evening of November 20 but denied knowing what happened to her.

“This is a loss that is different from other losses because there is no closure. It’s like you can’t finish grieving; it’s a continuance untied feeling that hits me,” said LaTasha Dennis, Sage’s mother. Eanna Langston, Sage’s sister added, “With every milestone I reach, I wish he was able to be there getting my license, graduation, scholarship ceremonies, or college move-in day, but he is not.”

Then, McFadden, too, became a missing person in 2019. He was uncooperative with the police and like Sage, he vanished. It was his mother who reported him as an official missing person in 2019 after learning that his father had not already done so. It has been reported by CBS19 that McFadden has connections to “Baltimore, Maryland; Joppa, Maryland; Lake City, South Carolina; Columbia, South Carolina; Atlanta, Georgia; New York City, New York; or Rochester, New York, along with other places on the West Coast.” 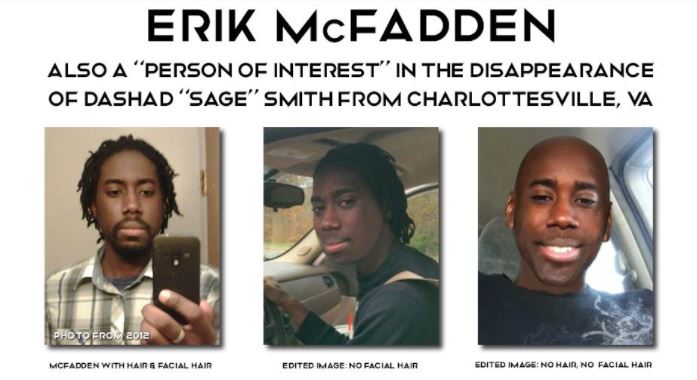 McFadden’s whereabouts remain unknown. He has been named as a critical person of interest in this case and police believe he was the last person to see Sage Smith. The last time anyone had contact with McFadden was in 2013 when he sent his girlfriend an email. Sage’s missing person case was later classified as a homicide. Sage’s grandmother, Lolita Smith, reportedly passed away in May 2019 without finding the answers she so desperately sought.

Charlottesville Police are reportedly offering a $10,000 reward in this case and the city is matching that $10,000 for any information leading to an arrest.

At the time of her disappearance, Sage Smith stood 5 feet 11 inches tall and weigh approximately 130 pounds. She had black/dark brown hair (may wear a red wig) and brown eyes. Her ears and nipples are pierced. Sage was last seen wearing a black jacket, dark gray sweatpants, a black scarf, and gray boots.

Please share this story about Sage Smith to help bring resolution to this case and to find Erik McFadden. She is our sister and her life matters.

Za’Ria Wojtylko, 13: Family Fears She May Have Been Abducted