The loved ones of Pat Moss have never given up on finding out what happened to her back in 2011. Today (September 4) marks the 10-year anniversary since the beloved grandmother went missing from Riverdale, Georgia. We often read about cases involving mayhem and murder, but it is speculated that 77-year-old Pat Moss may have wandered away from her home in confusion.

Reports state that this decade-old case has run cold as authorities have exhausted leads. Pat’s nephew, Charles Brown, spoke with WBS-TV back in 2014 and was in disbelief as he questioned how a person who is connected to their loved ones could just disappear without a trace.

“I feel horrible. I feel really sad for my mother, it’s her sister. And my other aunt, they’re…our family is really, really small and there’s not many of us here,” Charles said at the time. “We have to have hope it’s all we have left in a situation like this.”

Pat was reportedly diagnosed with both dementia and Alzheimer’s Disease, and she reportedly suffered from bouts of confusion and memory loss before going missing. In the onset of the investigation into her missing person case, Pat’s loved ones passed out flyers door-to-door and kept the case at the forefront of people’s minds in the Riverdale area for as long as they could.

Not long after Pat went missing, a woman called authorities and told them that she gave the grandmother a ride to the Hartsfield-Jackson International Airport in Atlanta, about 15 to 20 minutes from Riverdale. Pat Moss reportedly expressed that she wanted to see her sister who lived in California, however, there was no indication that Pat purchased a plane ticket. Soon, leads dried out and police did not have any idea what happened to her.

“It is considered a cold case but our cold cases are always active cases, we continue to work them,” said Clayton County Police Capt. Angelo Daniel. “We haven’t had any leads and we encourage anyone with information to come forward. It is critical that we speak with them.” 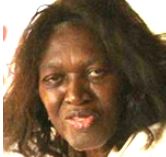 Nephew Charles added, “We’re going to keep hope alive. I’m going to keep trucking back to Atlanta as often as I can so that no one forgets my Aunt Pat.”

At the time of her disappearance, Pat Moss stood 6 feet tall and weighed between 160 to 190 pounds. She had dark brown hair and brown eyes. Pat was last seen wearing a floral blouse and a long blue skirt. She reportedly speaks with a “Jamaican” or “Caribbean” accent. Pat did not drive and reportedly also went by the names “Joyce Walker, Joyce Cook, Pat Celena Walker, Pat Celena Ross, and Pat Celena Moss.” She would be 87-years-old at the time of this publication.

Please share this story about Pat Moss to help bring her home. She is our sister and her life matters.

Our Black Girls@OurBlackGirls
222 Following 1.3K Followers
RT @adrierising: if i posted a picture of myself bleeding after being shot at a 4th of july parade and huffpo staff writer replied telling…
7 hours ago
5.8K
RT @WCPO: When Aurora McCarter went missing, her parents contacted Golf Manor police, telling them she could be in danger, but they believe…
7 hours ago
3
RT @blkwomenradical: “…I am not free while any woman is unfree, even when her shackles are very different from my own. & I am not free as l…
6 hours ago
106
Children