The loved ones of Natoya Stephens are asking for help in locating the mother of two. Once again, locating information about Natoya or her case proved to be difficult, but it has been shared that the 29-year-old was last seen in Brooklyn, New York on July 10, 2012. Details regarding this case are scarce, but agencies state that Natoya and her fiancé were at their residence on the 500 block of Lefferts Avenue when they got into an argument. She has never been seen or heard from again.

What transpired during that fight is unknown and the name of Natoya’s fiancé has not been named in reports. It was added that Natoya Stephens owned and operated a restaurant on Fulton Street, a business that she ran with her fiancé. The status of this investigation is also unclear, but Facebook Page has been set up to help shed light on this case. It looks as if it was Natoya’s best friend who launched the effort. The most recent update was made back in July.

“9 yrs? Can a person really walk away from life; her young children for 9 yrs? The detectives need to revisit this missing person case and go after the folks who are responsible for Natoya Stephen disappearance,” the person wrote in the caption to a flyer of Natoya’s missing person case. Way back in April 2014 a post read, “She is a mom, a daughter, a sister a friend, Grand daughter, a cousin! Please repost!”

At the time of her disappearance, Natoya Stephens stood 5 feet 1 inch tall and weighed 130 pounds. She had black/dark brown hair and brown eyes. She had at least one tattoo: a flower with the word “Ricky” under it on her left hand. Both of her ears are pierced. What she was last seen wearing is unknown. Natoya would be 38-years-old at the time of this publication.

Anyone with information about this case is urged to contact the New York City Police Department – Missing Persons Squad at (212) 694-7781 (agency case number KNMP07623), the Crime Stoppers hotline at 1-800-577-TIPS, or text CRIMES and then enter TIP577 (REFERENCE ID:971, please use this id when calling). 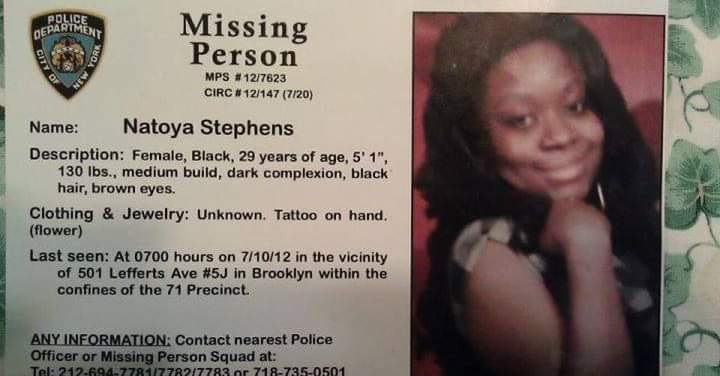 Please share this story about Natoya Stephens to help reignite the investigation into her disappearance. She is our sister and her life matters.