This is a mystery that seems as if it will only find a definite resolution from someone stepping forward with unheard information. Unidentified persons are particularly jarring for some who cannot believe that there hasn’t been movement on these cases in decades. Such is a story out of Pennsylvania about Philadelphia Child Jane Doe (named as such for the purposes of this article, but also referred to as “The Little Girl on Collum Street” ) whose remains were located on November 25, 1984, around the Thanksgiving holiday.

According to reports, a resident was walking his dog near a park when the canine came across bones in a brush and brought one back to its owner. They quickly recognized it was a human skull and called the authorities. An investigation would uncover that the remains belonged to a young Black girl approximately four to six years old. The cause of death could not be determined, nor could the estimated time of death. Reports state that the remains were skeletonized and portions of them were missing including the arms and the torso.

Police are said to have attempted to have the dog guide them to the exact spot where it found the skull, but their efforts were futile. There were more of the child’s bones and tufts of hair found in surrounding woods and behind a home. The little girl’s remains were later buried in an unmarked, City Cemetery—Dunks Ferry Road potter’s field—grave.  The cemetery would later be shut down while those graves stayed put. In 2018, a team looking to reinvestigate this case wanted to run tests on Philadelphia Child Jane Doe’s remains, but unfortunately, officials could not find the exact location of the grave, and for now, her case is at a standstill because even in death, she is once again lost and mishandled.

“Forget about me being a prosecutor, just as a parent when you have a daughter, you hear a story of this girl whose age we don’t know, and no one ever reported her missing. We want to know who she is,” Philadelphia Assistant District Attorney Anthony Vocci, Jr. said to WPVI back in 2018. 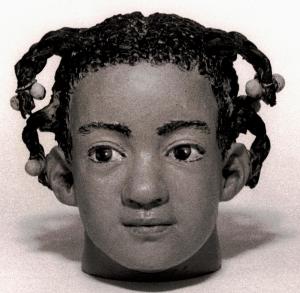 The investigation could not match the girl to any reported missing person. It has been presumed that she was the victim of a homicide, but there just wasn’t enough evidence to definitively state that as factual information.

At the time of her discovery, the height and weight of Philadelphia Child Jane Doe could not be determined. Her hair was black/dark brown and short (The Doe Network reports that it was “braided”), curly hair was present. Her eye color could not be determined. It is reported that there wasn’t any clothing found with the remains. Dental records, DNA, and fingerprints are not available.

Anyone with information about this case is urged to contact the Philadelphia County Medical Examiner at 215-685-7445 or 215-685-7458, or their local authorities. The case number is 84-5583. This case does not list an investigating police department.

Please share this story about Philadelphia Child Jane Doe, or The Little Girl on Collum Street, to help reignite the investigation into her case. She is our sister and her life matters.

Our Black Girls@OurBlackGirls
222 Following 1.3K Followers
RT @blkwomenradical: “…I am not free while any woman is unfree, even when her shackles are very different from my own. & I am not free as l…
5 hours ago
105
Sex trafficking isn’t just a man snatching you off of the street… It’s also women posing as your friends. https://t.co/n7WO5iYD4j
13 hours ago
11 15
RT @aware_the: UPDATE: The 6-year-old missing from Fort Myers has been found safe in Hillsborough County, according to the Fort Myers Polic…
13 hours ago
62
Children

Latisha Hayes McCarter, 15, May Have Been Kidnapped In 1998