It was almost two weeks ago when I reported on the story of Rajah McQueen, a 27-year-old woman who vanished from Cleveland, Ohio, on June 26, 2021. The information that has been shared about Rajah’s case has been ominous: in the early morning hours, Rajah was seen in her vehicle with another person at a gas station. Then, several hours later, her car was captured by surveillance cameras at that same location once again—however, an unidentified person was behind the wheel. Even more concerning were the three bullet holes that were seen in her car.

After publishing that article, Rajah’s cousin, Alicia Kirkland, came across the story and reached out to me, and thankfully, she has agreed to speak more about Rajah, her family, and this case. Alicia confirmed the information included in the original article and I wanted to make sure that if there were any other details that she would like to share, she could do so on OBG. I have to preface this by also mentioning that Alicia provided insights that have yet to be released to the public and a few that the authorities do not want to be shared in reports. Out of respect for the investigation, and Rajah’s loved ones, those pieces of information will not be included here. It is important to bring that up because readers may be left with questions that do have answers, but they have yet to surface publicly.

Once the authorities have given the green light to detail that information in news reports, I will certainly return to do so.

Additionally, this article is largely comprised of quotes from Alicia because I feel that it is important for us as consumers of this information to hear directly from relatives and loved ones when we can. I will do my best to fill in any missing pieces that weren’t directly spoken about by Alicia, herself.

“Rajah was as sweet as pie. She was a beautiful girl,” said Alicia. “She was tough, she was strong, but she was very sensitive… She loved the Lord and we attended church together for a few years, and she was just diligent on serving God.” Rajah had a deep love for music and pursued her aspirations at Rosedale College, and “tried her hardest to be successful and do good.”

“When her car was [seen], there was someone in the car,” Alicia explained. “The family was privy to information that other people don’t get. So, we were actually briefed in a police office, we were able to see surveillance video, which was about an hour-long… Even if you could read some of the reports, you’ll find that Rajah was in the car with someone then she wasn’t driving anymore and that person was driving.” 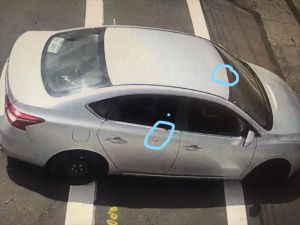 “Her vehicle is missing, it had no tracking device. There is no GPS tracker on her phone. The time that this happens, her phone goes off,” she added. “To camouflage her car, the license plates were removed and the hubcaps were taken off of her car, and there was not one gunshot, but there were three. They told that to the public (about only one gunshot) because they wanted to use some discretion.”

Alicia did identify the other person with Rajah and said that police are not ready to share the name of that individual with the public.

“She was a human being, she had been through a lot,” said Alicia as she choked up. It is clear that Rajah McQueen was beloved and dearly missed, and upon hearing Alicia become emotional, it is difficult not to connect with her grief. “The day she actually went missing, my two cousins went to put in a police report. They were not able to because they said that, you know, she’s an adult. So, the next night, my sister, she sent me a text message and told me that Rajah hasn’t been seen since that Thursday or that Friday.”

Eventually, with pressure from the family, authorities finally took the case seriously and allowed a missing person report to be filed.

“Det. Callahan has been extremely compassionate and efficient and he’s been diligent in making sure that the family is up to date with what they’re getting, but as far as right now, they’re not really getting much [as it pertains to] leads,” said Alicia. “No one is talking.”

“Rajah has two children, Cameron and Caden, seven and eight… I love Rajah. We all really love her. [Alicia begins to cry] I don’t know to describe her. She’s just a good person and nobody deserves for something like this to happen to them. And my cousin was just beautiful, inside and out, and I just don’t know. I don’t know. I think one of the best attributes that she had was that she just knew how to talk to you on a level that you could understand. She was able to reach so many people through the things that she went through, which weren’t easy. I just miss her coming to me, ‘Cousin, can I get my hair done?’ She’s just a hardworking, just a beautiful person. I just miss her. I miss her. We all do.”

At the time of her disappearance, Rajah McQueen stood 5 feet 7 inches tall and weighed 135 pounds. She had black/dark brown hair and brown eyes. Her middle name is “Adriana” and her vehicle’s license plate number is JGH3953.

Anyone with information about this case is urged to contact the Cleveland Police Department-4th District at (216) 623-5418 or their local authorities. The agency case number is 2021-197591. Crime Stoppers is reportedly offering a $5,000 reward that leads to finding Rajah McQueen or identifying the person or persons responsible for her disappearance.

Please share this story about Rajah McQueen to help raise awareness about her missing person case. She is our sister and her life matters.