Three people vanished from New York and police haven’t shared any updates about the mysterious case in over a decade. A mystery has plagued two families for nearly 15 years after what was supposed to be a quick trip turned into a triple missing person case. According to reports, then-30-year-old Sasha Davis, her three-month-old daughter Selah Davis, and Sasha’s then-27-year-old friend Jarib “Griff” Bennett were all set for a trip to Rochester, New York. Sasha and Jarib were reportedly going to visit some friends with Sasha’s daughter in tow and began their travels on February 15, 2008. They were reportedly scheduled to return four days later on February 19.

While Sasha lived in New York City, Jarib was said to have resided in New Jersey with his wife and two daughters. Sasha reportedly had another daughter that did not make this Rochester trip and stayed home. The distance from the Bronx to Rochester is about a five-and-a-half-hour drive, and it seems that Sasha and Jarib rented a car for the journey. Now, it is unclear if they ever reached their destination, but it was stated that the trio has never been seen or heard from again. One report stated that the last time anyone had contact with them was on February 18.

The Charley Project reported that on February 27, the rental vehicle was located in southwest Rochester on Genessee Street near Genesee Valley Park. The car was abandoned, however, it is unclear if investigators found anything that could suggest what happened to the trio of travelers. It is also unknown who they intended to visit, as is the nature of that reunion; yet, in March 2009, the New York State Missing and Exploited Children Clearinghouse issued its annual report, and in it, they mentioned this case, adding that Sasha and Jarib were traveling to “collect a large sum of money.” 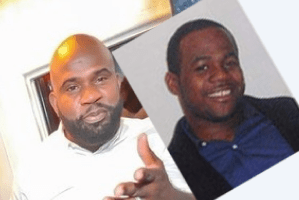 There are very few public details available in this case, but in 2017, the mystery deepened after an obituary for a “Jarib Bennett” surfaced on Legacy.com. The obituary stated that this deceased Bennett shared the same birthday as the missing man, had lived in New Jersey, but died in Wisconsin. It also listed that he was married and had daughters, but there was no mention of him ever being missing or if he was the same person related to this enigmatic case. A photo was listed and it didn’t take long for internet sleuths to begin drawing comparisons.

See the photos of both Jarib Bennetts in this article, with the deceased Bennett on the left and the missing Jarib on the right. 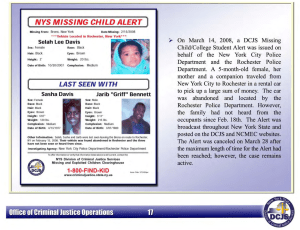 Due to the nature of this case, it is quite simple to find conversations from true crime enthusiasts giving their takes on what could have happened to the trio. People have questioned the nature of Sasha and Jarib’s relationship and whether or not they were romantically involved, but there has been no information from the authorities to substantiate any of those claims at this time. With the 15-year anniversary of this case approaching next year, one can only hope that the New York City Police Department will offer some update on the status of their investigation.

“Hope” is the operative word.

Other reports stated that Sasha’s family didn’t know that she would be traveling with Jarib. There were also rumors that Sasha did have a boyfriend at the time, but once again, that information could not be confirmed.

Marcie Peterson Disappeared After Being Threatened Over $30K Loan

At the time of her disappearance, Sasha Davis stood 5 feet 5 inches to 5 feet 7 inches tall and weighed 120 pounds. She had black/dark brown hair and brown eyes. She has a mole near her right eye, a tattoo on her left breast, and a tattoo on her right calf. Sasha’s middle initial begins with a “G.” She would be 40 years old at the time of this publication, and he daughter would be approximately 15.

Anyone with information about this case is urged to contact the New York City Police Department – Missing Persons Squad at (212) 694-7781 or their local authorities. The agency case number is 08-3236.

Please share this story about Sasha Davis, her daughter Selah, and her friend to help reignite interest in these cases. Sasha and Selah are our sisters and their lives matter.