It is a parent’s worst nightmare to learn that their child has gone missing—whether they be a youth or an adult. Earlier this year, the family of Beverly Logan faced an experience that no one could have prepared for when they no longer were able to get in contact with the 32-year-old. The last time anyone saw or heard from Beverly Logan was on January 25 in Montgomery, Missouri, near her boyfriend’s home, but she wasn’t officially reported missing until February 13 after weeks of silence. Friends of Beverly’s told the Belleville News-Democrat that it was unlike her to up and leave without making contact, so unsurprisingly, they are concerned for her safety and well-being. 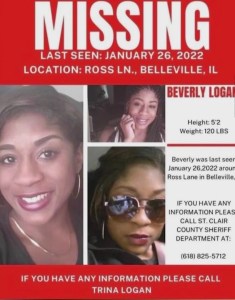 Over the past seven months, Willie and Trina Logan, Beverly’s parents, have made repeated public pleas for help.

“We want to know one way or another if Beverley is here with us,” Willie Logan reportedly said. “We want to know and if she’s not with us, we want to know so we can put this thing to rest in our mind and in our spirit.” Trina added, “It could be your loved one or it could be you, but we are soliciting help from the public to help us to resolve this. This is torture. This has caused a lot of pain, restlessness, and we are looking for closure.  So, if you know anything out there well, if you have any type of connections with anyone that you have heard something, please contact St. Clair County.”

The investigation would lead police to a home in nearby Bellflower, approximately 10 miles away from Montgomery. It was reported that Beverly’s personal items were located at the property, including the missing woman’s cellphone.

“Several residences have been searched, along with areas on both sides of the river in Montgomery County and St. Clair County and no leads have been developed at this time as of the location of Beverly or why she has gone missing,” Sheriff’s Department Capt. Bruce W. Fleshren said.

In June, it was reported that Charles Story, an Illinois man, was arrested in connection to the disappearance of Beverly Logan. According to reports, Story, 40, was wanted for questioning about the ongoing case, and when police visited him, they were engaged in a standoff. After obtaining a search warrant, investigators went to Story’s Bellflower home where he was said to have barricaded himself inside while making threats to shoot himself and anyone else who attempted to make entry. 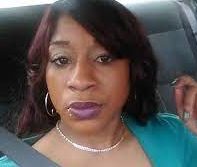 The exchange was “brief,” and after police took Story into custody, he was admitted to a hospital where he needed to be treated for a gunshot wound. It is reported that he sustained that injury days prior in a separate incident. Story has a history of run-ins with the law, including at least three restraining orders against him, battery charges, threats to public figures, and resisting arrest. He is also a registered sex offender in Illinois.

There haven’t been updates on Charles Story or Beverly’s case since his arrest. She is the mother of a seven-year-old. It is unclear who Beverly’s reported boyfriend is or if there are any other persons of interest. Some reports state that Beverly is originally from Illinois.

Retha Hiers Vanished In 1982, Tied To Disappearances Of 2 Other Women

At the time of her disappearance, Beverly Logan stood 5 feet to 5 feet 2 inches tall and weighed 100 pounds (described as “very small”). She had black/dark brown hair (described as neck length, thick hair, naturally curly) and brown eyes. Beverly was said to have had thick sideburns. She has a tattoo of the name “A’Ryah” on her right arm and an animal on her back. Beverly reportedly has dark spots on her face. Her middle name is “Jackee.” She was last seen driving a blue Nissan Versa, Alabama license plate 2CH1060.

Please share this story about Beverly Logan to help reignite interest in her missing person case. She is our sister and her life matters.