*UPDATE* It is with a heavy heart that I must report Alisha McQueen, a missing woman from Detroit, Michigan, has been found deceased. A body of a woman was found encased in cement in Ecorse, Michigan and was later identified to be Alisha. Her estraged husband, Gregory McQueen, was suspected in her disappearance, and earlier this week, he was officially charged with her murder.

“I want her to be able to rest in peace and to know that justice will be served,” said her mom Lisa Gross.

“He’s a very violent person, this is the kind of things he does and I’m not surprised this is what happened to my sister. There’s a lot of regret because I feel like this could have been prevented,” said Alisha’s sister Tanisha.

McQueen faces life in prison and returns to court next week I send my sincerest condolences to Alisha’s loved ones. 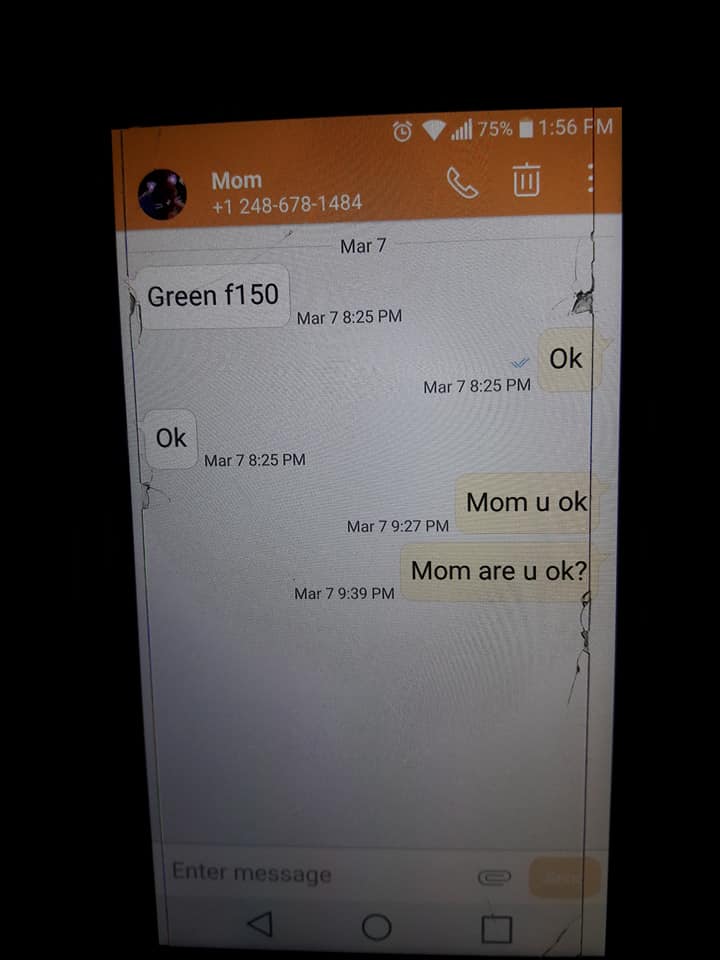 Alisha McQueen was going through a difficult transition. The 27-year-old mother was in the process of leaving her husband, so she was living in a Detroit, Michigan apartment with her sister, Tanisha Holloway. Alisha was hanging out at home in early March 2018, just lounging on the couch as many of us do around 8:00 p.m. when she said she was making a quick run to the local gas station and that she would be right back. It shouldn’t have taken her long, seeing as how she was only going to walk a couple of blocks down the street.

When Alisha left that apartment, no one expected that was the last time she would be seen. Alisha did, however, send an ominous text message to her daughter that simply read, “Green f150.”

“She sent that text message – I don’t know if she thought she was in danger or what,” Tanisha said.

The description of a vehicle that Alisha texted may not mean much to some, but it means everything to her family. You see, Alisha’s estranged husband drove a green, F-150 truck. According to Tanisha, her sister’s husband, Drewmeshus McQueen, Jr., had been abusing Alisha for years.

“A very dysfunctional marriage,” Tanisha said. “There has been abuse, infidelities, just wasn’t a good relationship. But they are still legally married. My sister was talking about divorce.”

Alisha’s sister, Teasha Bonner, is certain that Alisha and her husband were together when Alisha disappeared.

“He was with her and she texted the vehicle that she was in,” Teasha said. “Currently, he’s in jail. He was not supposed to have contact with her. He was on a tether. So, he’s in jail right now. He’s not speaking. He said he doesn’t know where she is. So we’re hoping soon he can speak up and tell us where she is. She was with him last.”

McQueen is incarcerated on unrelated charges.

Adding to Alisha’s family’s concern is that the young woman has been diagnosed with bipolar disorder and schizophrenia. It’s been over five months since she went missing and each passing day is agony for her five children.

At the time of her disappearance, Alisha McQueen stood 5 feet 3 inches and weighed 200 pounds. She was wearing a shoulder-length, black curly wig with brown highlights when she disappeared. Her natural hair is dark brown/black, and she has brown eyes. Alisha also has multiple facial piercings.

On August 7, Teasha posted to the Metro Detroit Crime & Homicide Facebook Page asking for help in locating her sister.

“Has anyone seen her??? This is my sister Alisha McQueen [formerly] known as Alisha Holloway. She’s 28 years old around 210lbs with brown eyes and dark brown hair. She went missing around the area of Warren and Trumbull the night of March 7th 2018, last with her husband ( that’s 5 months now 😫) Please if you know her whereabouts or have seen her or have ANY information contact me at 313-742-1399. Thank you!!”

My sister Alisha McQueen left my apartment sometime between 7:30pm and 8 something on Wednesday March 7. She met up with her husband somewhere in the area of Warren and Trumbull (and her husband said commonwealth a block west of the gas station on Warren and Trumbull), we don’t know. She sent a text to my neice of what vehicle she was in around the time she disappeared. She and her husband were in a green ford f150 (his mother’s vehicle). If anyone has seen them that night, please come forward with any information! Call the DPD 3rd precinct detective unit at 313-596-5341. It doesn’t matter if it seems small it might help! Please SHARE!!!

If anyone saw the above mentioned vehicle in Monroe that night in the trailer park please also come forward with any information!! Or if you saw her walking down west Warren!

Please share this story about Alisha McQueen to continue the conversation regarding her mysterious disappearance. She is our sister and her life matters.